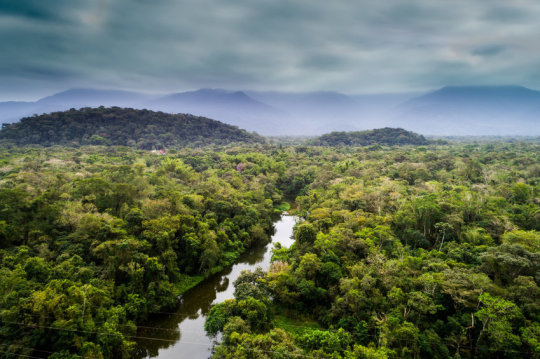 Financial institutions, such as banks and pension funds, have a key role to play in efforts to avoid dangerous climate change. And it is not only about redirecting investments to renewable energy and low-carbon businesses, but also to bolster the resilience and stability of the Brazilian Amazon and boreal forests in Russia and Canada, two known ‘tipping elements’ in the Earth system. Such tipping elements have also been referred to as ‘Sleeping Giants’, because once “awakened” they can have pivotal impacts on the global climate by becoming large-scale emitters of carbon dioxide, as opposed to storing carbon in soil and vegetation.

This is the message of a new study published in the latest issue of Global Environmental Change.

“In contrast to standard approaches in green finance, we elaborate the ways in which financial actors are linked to economic activities that modify large ecosystems of key importance for stabilizing the planet’s climate,” explains author Victor Galaz, deputy director of the Stockholm Resilience Centre at Stockholm University.

The article is based on a study done by a team of researchers from the Global Economic Dynamics and the Biosphere programme (GEDB) at the Royal Swedish Academy of Sciences, the Stockholm Resilience Centre at Stockholm University, the Australian National University and the University of Groningen in the Netherlands.

“Our research allows us to identify a small set of international financial players who can influence climate stability through their ownership of stock in economic sectors that modify both the Amazon rainforest and boreal forests,” says co-author Beatrice Crona, Executive Director of GEDB and researcher at Stockholm Resilience Centre.

These financial institutions are denoted “Financial Giants” in the new study that also explores how incentives and disincentives currently influence their potential to bolster or undermine the stability of the climate.

“The study is the first of its kind to link data on global investors and the science on tipping points in the Earth system,” says co-author Will Steffen from the Australian National University in Canberra.

The pivotal role of investors

In recent decades, scientists have begun to use the term ‘tipping elements’ or ‘Sleeping Giants’ to describe a limited number of biomes and processes on the planet that are exceptionally important for maintaining global climate stability. These biomes and processes can change rapidly when human pressures reach a critical level. The new study makes explicit the links between stock ownership, global institutional investors and two of these tipping elements: the Amazon rainforest and the boreal forests of Russia and Canada.

“We focus on these forested areas because they represent tipping elements that are highly vulnerable to tipping in the next few decades, and where the financial sector plays a crucial role,” explains Victor Galaz.

This implies that the financial system can provide an important lever to help ensure the stability of these tipping elements in the near term and the long term.

The study concludes that the Amazon rainforest, boreal forests and other tipping elements are now systemic risks for the global financial system. If the internal dynamics of these large regions change, leading to the emission of large volumes of carbon into the atmosphere from soils and vegetation, then stabilizing the climate in the future will become significantly more difficult, in turn affecting financial stability.

A handful of stockholders

As the study shows, financial investments are already today contributing to economic activities that are pushing some Sleeping Giants towards their tipping points. For example, investors provide capital to, or own shares in, companies that produce soy, beef, timber and other commodities that require extensive deforestation and forest degradation.

The authors find that a handful of stockholders own substantial shares across the largest companies in the most significant sectors. The total holdings of these investors reach above the 10% threshold in three out of eight companies in the Amazon, five out of sixteen in Canadian boreal forests, and three out of five in Russian boreal forests, they write.

These institutional investors with a global reach are called ‘Financial Giants’ by the authors because they have a great but unrealized power to influence the resilience of several of the planet’s ‘Sleeping Giants’.

“Investors have several means at their disposal to influence the companies in their portfolio: They can require explicit targets to be met regarding reforestation and rehabilitation, as well as protecting and improving biodiversity. They also can credibly threaten to divest from the companies in case the interests and objectives would be too far apart. Next to reputational damage, this may affect the cost of equity for the divested firms,” says Bert Scholtens from the University of Groningen.

In conclusion, the study emphasises that finance cannot be made solely responsible for a transition to climate sustainability, but the sector plays a critical role. More responsible leadership could contribute meaningfully to better management of these large forests, and hence contribute to climate stability.