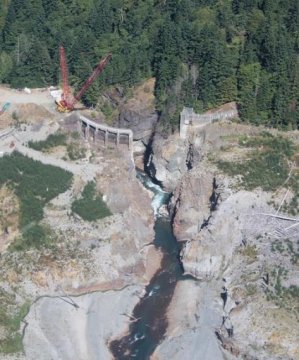 In the United States, the removal of dams now outpaces the construction of new ones — with more than 1,400 dams decommissioned since the 1970s — and a new study suggests that the ecosystem effects of dam removal can be predicted.

Published in the journal BioScience, the study identifies a consistent set of physical and biological processes that control ecological responses to dam removal. These processes, combined with the unique environmental conditions found at each dam, ultimately determine how the ecology of the river will respond.

“We found that each dam removal is unique because of the location, size, and history of the watershed,” said Ryan Bellmore, a Juneau, Alaska-based research fish ecologist with the U.S. Forest Service’s Pacific Northwest Research Station who is lead author of the study. “Nevertheless, we found that ecological responses generally follow similar patterns.”

Although dams are primarily removed because they are aging and are costly to repair or upgrade, ecosystem recovery also is a common objective, particularly for fish species such as salmon that are culturally and economically important.

Bellmore and 14 other government, university, and nonprofit organization colleagues synthesized more than 125 dam removal studies and ecological theory into conceptual models. These models reveal the key physical and biological factors responsible for driving ecological responses to dam removal and show that these factors — and associated ecological responses — are distinctly different upstream and downstream of removed dams. Upstream of former dams, the major driver involves aquatic species recolonizing habitats that they were not able to access with the dam in place. Downstream of former dams, the river often receives a surge of sediment that had accumulated in the former reservoir, which can lead to major — although temporary — effects on aquatic organisms. Finally, in the former reservoir itself, species that are adapted to slower, deeper water are replaced by those adapted to shallower, faster moving water.

Managers and dam-removal practitioners can use the study’s models to gauge the potential range of ecological responses to dam removal and the most likely future conditions, helping generate more realistic expectations for ecological recovery.

“This research expands our conceptual understanding and improves our ability to predict response to future dam removals,” said Jill Baron, co-director of the U.S. Geological Survey’s John Wesley Powell Center for Analysis and Synthesis, which sponsored the work.