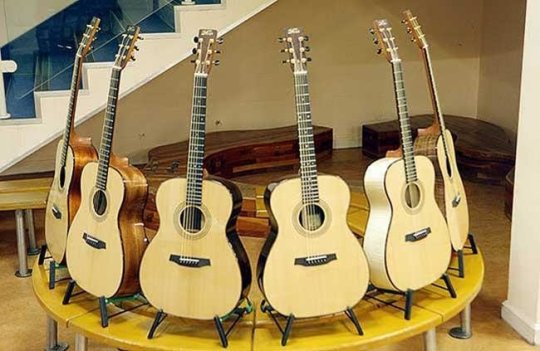 Researchers have tested the sounds made by six different acoustic guitars in a study addressing the effects of the type of wood used in their construction.

The steel-string acoustic guitar is one of the world’s most popular musical instruments. Some of the woods used for guitar backs are revered by guitar players for their acoustic qualities, and are claimed to be tonally superior to other woods.

Unfortunately many of these woods are expensive, rare, and from unsustainable sources.

Guitar manufacturers are aware of this issue and have taken a range of initiatives to address it, such as using different and more readily available woods as substitutes. The challenge is to find woods that are sustainable and cheap without compromising on the sound quality and playability of the instrument.

A study led by Lancaster University tested six steel-string acoustic guitars which were specially built by guitar maker Roger Bucknall (Fylde Guitars). They all had the same design and material specifications except for the back and side plates which were made of woods varying widely in availability and price:

Overall sound quality ratings were then given by 52 guitarists in a dimly lit room who played the different guitars while wearing welder’s goggles to prevent visual identification.

They gave similar ratings to all six guitars, while blinded tests by 31 of the same guitarists indicated that they could not easily distinguish the guitars by their sound or feel.

Professor Christopher Plack of Lancaster University said: “We found that acoustically, the differences between the guitars were minimal. Guitarists gave very similar ratings to the sound quality and playability of the different guitars under blinded conditions. Furthermore, their ability to distinguish the guitars by their sound in a blinded discrimination test was poor.”

“Overall our results suggest that the back wood has a negligible effect on the sound quality and playability of an acoustic guitar, and that cheaper and sustainable woods can be used as substitutes of expensive and endangered woods without loss of sound quality.”

These results will not come as a big surprise to many acousticians, because previous studies indicated that the back plate has only a small influence on radiated sound, but this is one of the few studies that explicitly addresses the issue of back wood species combining physical and perceptual measurements.