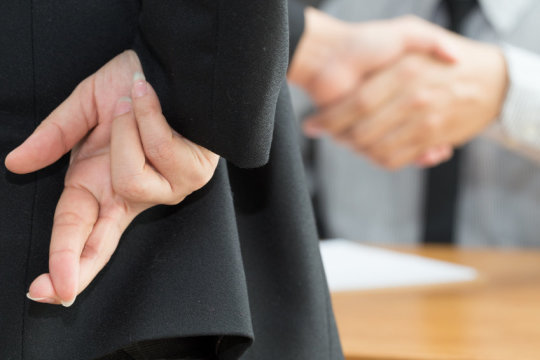 The verbal and physical signs of lying are harder to detect than people believe, a study suggests.

Tests reveal that people are skilled at identifying commonly displayed cues — such as hesitations and hand gestures — but these signs are produced more often when someone is telling the truth.

Liars are also skilled at supressing these signals to avoid detection, researchers found.

Psychologists used an interactive game to assess the types of speech and gestures speakers produce when lying, and which clues listeners interpret as evidence that a statement is false.

Researcher Jia Loy, from the University of Edinburgh, created a computerised two-player game in which 24 pairs of players hunted for treasure. Players were free to lie at will.

Researchers coded more than 1100 utterances produced by speakers against 19 potential cues to lying — such as pauses in speech, changes in speech rate, shifts in eye gaze and eyebrow movements.

The cues were analysed to see which ones listeners identified, and which cues were more likely to be produced when telling an untruth.

The team found listeners were efficient at identifying these common signs.

Listeners make judgements on whether something is true within a few hundred milliseconds of encountering a cue.

However, they found that the common cues associated with lying were more likely to be used if the speaker is telling the truth.

Lead researcher Dr Martin Corley, of the University of Edinburgh’s School of Philosophy, Psychology and Language Sciences, said: “The findings suggests that we have strong preconceptions about the behaviour associated with lying, which we act on almost instinctively when listening to others. However, we don’t necessarily produce these cues when we’re lying, perhaps because we try to suppress them.”