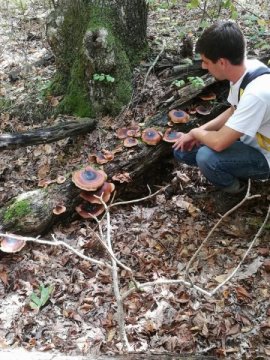 A new study appearing in PLOS Biology on May 31 examines more than a century of fungal pathogens, finding well-aimed biosecurity measures cut the spread of unwanted fungi into a nation, even in the face of increased globalized trade.

“Although trade is closely tied to the number of new invasions we have from fungal pathogens, if we have targeted biosecurity we can start to break down this link,” said lead author Benjamin Sikes, assistant professor of ecology & evolutionary biology at the University of Kansas and assistant scientist at the Kansas Biological Survey. “Because globalization and imports to and from other countries are just going to keep increasing, most data have shown with that come lots of new invasive species around the world. The question is, can you slow that? This work shows that link can be slowed with implementation of targeted biosecurity measures.”

Sikes, a microbial ecologist whose research focuses on soil fungi, analyzed a New Zealand database of plant pathogens and diseases going back to the 19th century as part of a collaborative project among KU, New Zealand’s Bio-Protection Research Centre and Manaaki Whenua-Landcare Research.

“There’s a huge number of ways people can bring plant pathogens into New Zealand or a country like the United States,” he said. “Many are brought in with agricultural imports. People bring in seeds or plant materials — even soils or lumber can have pathogens that were on those plants to begin with or are in those materials once they bring them through. If they’re not screened properly, these pathogens can establish and start to spread to local crops and plant species.”

The term “biosecurity” is a “really big umbrella” that has evolved over the years reviewed in the new study, according to Sikes. The research focused primarily on the consequences of border surveillance, phytosanitary inspections and quarantine for incoming plant diseases.

“At ports of entry there are border-inspection people, like our USDA,” he said. “If they’re getting in a shipment of bananas to the U.S. from Costa Rica, there would be a person inspecting it, looking for visible symptoms and spot testing for the most prolific diseases from source countries. They might also have quarantine periods, where imports need to be held for a set amount of time to ensure they are pest-free.”

The consequences of invading pathogens are “massive” around the world and can include economic as well as ecological effects, according to the KU researcher.

“For fungal pathogens that we were looking at, they cause heavy losses economically for crops every year, into the billions of dollars and perhaps as much as 20 percent of yields,” said Sikes. “Even for an agricultural state like Kansas, my guess is that it would be hundreds of millions of dollars in most years. The pathogens are not all imported; some are localized. Imported pathogens, though, can also be a problem for native ecology. Chestnut blight is a great example that decimated chestnut trees in the eastern U.S. — it was a fungal blight from Asia. It changed how people see the forest. People in the eastern U.S. who lived the early 1900s wouldn’t recognize the forest today, because one in every three trees was a chestnut tree.”

Sikes and colleagues used data from New Zealand, which spends 0.3 percent of its gross domestic product on biosecurity measures, to assess whether the country’s program has been effective in slowing the introduction and spread of fungal plant pathogens. Sikes said New Zealand was a unique case because many of their crop plants are not native to the country.

“Because all of these crops in New Zealand aren’t originally from there, almost all the bad diseases are not from there as well, so can be imported as well,” he said. “The danger from imported pathogens is about the highest it could be in New Zealand. Whereas in a large continent like here in the U.S. or in Asia, dangers from existing pathogens may be a lot higher.”

Drawing from a database of all known plant-pathogen associations in New Zealand going back to 1880, the researchers determined the rate at which new fungal pathogens arrived and became established on 131 economically important plant species over the last 133 years.

“We had this ability in New Zealand because of the records that were there and because it’s a relatively young country,” said Sikes. “They’re a world leader in biosecurity, and it’s important for them to know if those measures are working and worth spending money on.”

The researchers found as trade between nations all over the world, including New Zealand, became more globalized, the number of pathogens introduced into the country rose in direct proportion. However, pathogens started to level off in particular industries like crops after New Zealand implemented specific biosecurity measures to target pathways for those pathogens.

“We see an exponential increase over time in the number of bad things that get introduced,” Sikes said. “But around the 1980s, if we look at all the plants at once, that rate starts to slow. Fewer new things are coming in. When you drill into why that is, it’s caused by two counteracting trends between industries. For crops and pasture species familiar to us here in Kansas — like corn and wheat — they started slowing down in the number of pathogens they were getting back in the ’60s and ’70s. This timing is about a decade after they instituted important biosecurity measures like looking at seeds to make sure they were pathogen- and pest-free and creating a USDA equivalent to go out and survey crops. This timing coincides with the slowdown in new pathogens coming in.”

“Forestry and fruit trees continue to have many new pathogens each year, and that’s still accelerating — their patterns go right along with the acceleration in trade,” said the KU researcher.

As part of the work, Sikes and his colleagues modeled both the arrival of new pathogens and the nation’s rate of detection. From these, the team was able to predict how many pathogens are present but remain undetected in a country like New Zealand.

“For the first time, we can quantify how fast these things are coming into a country, and that’s actually super hard to do,” Sikes said. “Given the amount of investment the U.S. or, say, Germany is making in biosecurity, we now can say, ‘You’ve found this number of things, and you looked this many times — and based on what we know, this is about how many things you would find if you were able to find them all.”