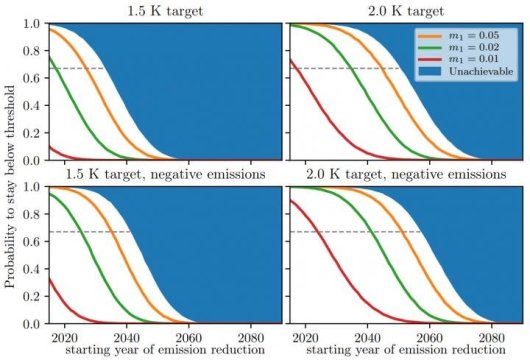 If governments don’t act decisively by 2035 to fight climate change, humanity could cross a point of no return after which limiting global warming below 2°C in 2100 will be unlikely, according to a new study by scientists in the UK and the Netherlands. The research also shows the deadline to limit warming to 1.5°C has already passed, unless radical climate action is taken. The study is published today in the European Geosciences Union journal Earth System Dynamics.

“In our study we show that there are strict deadlines for taking climate action,” says Henk Dijkstra, a professor at Utrecht University in the Netherlands and one of the study authors. “We conclude that very little time is left before the Paris targets [to limit global warming to 1.5°C or 2°C] become infeasible even given drastic emission reduction strategies.”

Dijkstra and his colleagues at the Utrecht Centre for Complex Systems Studies and at Oxford University, UK, wanted to find the ‘point of no return’ or deadline for climate action: the latest possible year to start strongly cutting greenhouse-gas emissions before it’s too late to avoid dangerous climate change. “The ‘point of no return’ concept has the advantage of containing time information, which we consider very useful to inform the debate on the urgency of taking climate action,” says Matthias Aengenheyster, a doctoral researcher at Oxford University and the study’s lead author.

Using information from climate models, the team determined the deadline for starting climate action to keep global warming likely (with a probability of 67%) below 2°C in 2100, depending on how fast humanity can reduce emissions by using more renewable energy. Assuming we could increase the share of renewable energy by 2% every year, we would have to start doing so before 2035 (the point of no return). If we were to reduce emissions at a faster rate, by increasing the share of renewable energy by 5% each year, we would buy another 10 years.

The researchers caution, however, that even their more modest climate-action scenario is quite ambitious. “The share of renewable energy refers to the share of all energy consumed. This has risen over the course of over two decades from almost nothing in the late nineties to 3.6% in 2017 according to the BP Statistical Review, so the [yearly] increases in the share of renewables have been very small,” says Rick van der Ploeg, a professor of economics at Oxford University, who also took part in the Earth System Dynamics study. “Considering the slow speed of large-scale political and economic transformations, decisive action is still warranted as the modest-action scenario is a large change compared to current emission rates,” he adds.

To likely limit global warming to 1.5°C in 2100, humanity would have to take strong climate action much sooner. We would only have until 2027 to start if we could increase the share of renewables at a rate of 5% a year. We have already passed the point of no return for the more modest climate-action scenario where the share of renewables increases by 2% each year. In this scenario, unless we remove carbon dioxide from the atmosphere, it is no longer possible to achieve the 1.5°C target in 2100 with a probability of 67%.

Removing greenhouse gases from the atmosphere, by using ‘negative emissions’ technology, could buy us a bit more time, according to the study. But even with strong negative emissions, humanity would only be able to delay the point of no return by 6 to 10 years.

“We hope that ‘having a deadline’ may stimulate the sense of urgency to act for politicians and policy makers,” concludes Dijkstra. “Very little time is left to achieve the Paris targets.”