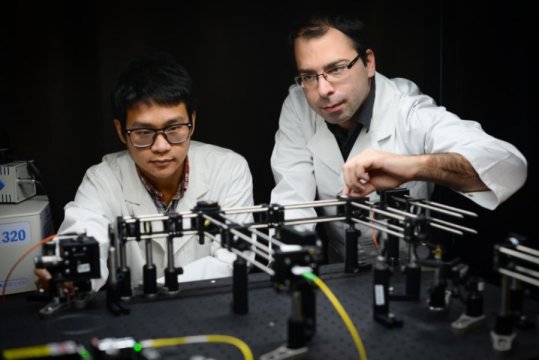 Tiny, nano-sized crystals of salt encoded with data using light from a laser could be the next data storage technology of choice, following research by Australian scientists.

“With the use of data in society increasing dramatically due to the likes of social media, cloud computing and increased smart phone adoption, existing data storage technologies such as hard drive disks and solid-state storage are fast approaching their limits,” says project leader Dr Nick Riesen, a Research Fellow at the University of South Australia.

“We have entered an age where new technologies are required to meet the demands of 100s of terabyte (1000 gigabytes) or even petabyte (one million gigabytes) storage. One of the most promising techniques of achieving this is optical data storage.”

Dr Riesen and University of Adelaide PhD student Xuanzhao Pan developed technology based on nanocrystals with light-emitting properties that can be efficiently switched on and off in patterns that represent digital information. The researchers used lasers to alter the electronic states, and therefore the fluorescence properties, of the crystals.

Their research shows that these fluorescent nanocrystals could represent a promising alternative to traditional magnetic (hard drive disk) and solid-state (solid state drive) data storage or blu-ray discs. They demonstrated rewritable data storage in crystals that are 100s of times smaller than that visible with the human eye.

“What makes this technique for storing information using light interesting is that several bits can be stored simultaneously. And, unlike most other optical data storage techniques, the data is rewritable,” says Dr Riesen.

This ‘multilevel data storage’ — storing several bits on a single crystal — opens the way for much higher storage densities. The technology also allows for very low-power lasers to be used, increasing its energy efficiency and being more practical for consumer applications.

“These results showcase the benefits of establishing complementary research capabilities and infrastructure at collaborating universities — this has been a deliberate strategy in the photonics domain that is bearing fruit across a number of projects,” says Professor Tanya Monro, DVC-R at the University of South Australia.

The technology also has the potential to push forward the boundaries of how much digital data can be stored through the development of 3D data storage.

“We think it’s possible to extend this data storage platform to 3D technologies in which the nanocrystals would be embedded into a glass or polymer, making use of the glass-processing capabilities we have at IPAS,” says Professor Heike Ebendorff-Heidepriem, University of Adelaide. “This project shows the far-reaching applications that can be achieved through transdisciplinary research into new materials.”

Dr Riesen says: “3D optical data storage could potentially allow for up to petabyte level data storage in small data cubes. To put that in perspective, it is believed that the human brain can store about 2.5 petabytes. This new technology could be a viable solution to the great challenge of overcoming the bottleneck in data storage.”

The research is published in the open access journal Optics Express.

Materials provided by University of South Australia. Note: Content may be edited for style and length.