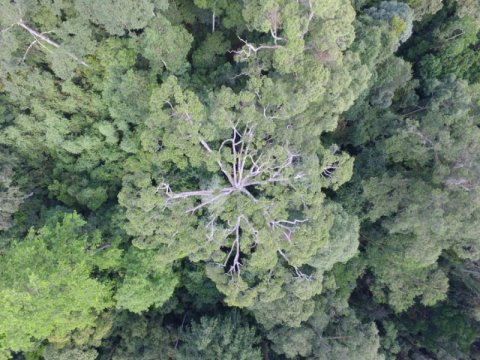 A team of Nottingham scientists is using drones to survey woody climbing plants and better understand how they may affect the carbon balance of tropical rainforests.

The findings of the study — ‘A view from above: Unmanned Aerial Vehicles provide a new tool for assessing liana infestation in tropical forest canopies’, have been published today in the Journal of Applied Ecology.

Previous research has found evidence that woody climbing plants — called lianas — have increased in both number and bulk in recent decades and are dramatically reducing the carbon uptake and storage of tropical forests. By using the trees as scaffolds, lianas climb to the canopy where they shade tree leaves, restricting tree growth and even killing trees by their tangling presence. The effect is to release carbon stored in the tropical forest into the atmosphere, with important and wide-reaching impacts for global warming.

Concerns are also growing that climate change is helping to fuel the rapid growth of these vines, and deforestation is leaving space in forests for lianas to flourish.

In order to fully understand the potential problems being caused by lianas, experts need to see how quickly they are growing and how much of the forest canopy they already cover.

Liana infestation of trees is traditionally measured from the ground, which can be labour intensive, time-consuming and difficult, particularly for those in the upper canopy layers. Now, Catherine Waite and her colleagues from the School of Geography at the University of Nottingham, have pioneered a new technique that will make the study of lianas much more affordable and efficient, as well as more accurate for trees in upper canopy layers.

Using light-weight unmanned aerial vehicles (drones), Catherine was able to capture aerial images of the trees which enabled her to accurately see the extent of the liana infestation from above the canopy.

Catherine said: “Some research indicates that proliferation of lianas is due to global warming, and this looks set to increase in the future. This recent proliferation of lianas, together with the large impact they have on the carbon balance and cycle of tropical forests, means it is more important than ever to study where they are infesting tree canopies more comprehensively and frequently than possible with current methods.”

Previously, experts have studied lianas from the ground, but this comes with difficulties as the canopy can be over 70 meters high, with understorey vegetation in the way, making visibility very difficult. In the past people have occasionally used data collected from a manned aircraft, but such data is much more expensive to collect and coarser because of the greater flying height, making discrimination of lianas less precise.

“With a drone it is much easier to assess liana infestation, especially in the taller trees. The images are of a high quality and you can accurately see how much liana there is in the tree crown,” says Catherine. “This method is also much quicker, as the drone can cover a larger area in less time, and more cost efficient as you need fewer people to carry out the survey.”

The data will now be used to map the lianas and look at what kind of influencing factors may affect why they are growing where they are.

Catherine adds: “In order to save our rainforests we have to look at why lianas are growing so rapidly and what human factors, if any, are influencing this. The data collected from the drone images are as accurate as ground data, but the drone method is also superior in assessing the infestation of tree crowns in upper canopy layers, as well as faster and less expensive. This will hopefully mean that we can take steps forward in liana and tropical forest ecology research.

“Understanding the impact lianas have on the global carbon balance is vital and it is particularly useful for forest management in the future, where knowledge and the location of the liana infestation can be used for tailored, targeted and effective management of tropical forests. As well as paving the way for improving models of climate change, our new method provides an important data source for understanding other ecological changes in tropical forests. For example, we can see tree phenological patterns in the images, such as flowering, fruiting, and leaf fall and flush. In tropical forests, most ecology happens in the canopy, but these have been relatively poorly surveyed because access is difficult. This is now set to change.”