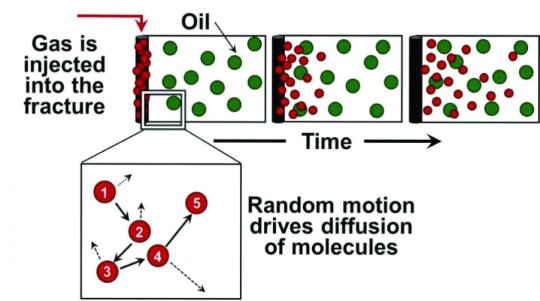 Oil companies are missing out on vast sums of recoverable oil in unconventional reservoirs, according to Penn State experts.

The researchers propose that companies are applying tried-and-true transport mechanisms for conventional oil extraction but are hitting recovery stumbling blocks because they are not accounting for the difference in physics found at unconventional reservoirs. Their research was published online in December in the Society of Petroleum Engineers’ Journal.

“Unconventional reservoirs are enormous and offer significant hydrocarbon reserves,” said Hamid Emami-Meybodi, assistant professor of petroleum and natural gas engineering at Penn State. “The scale of these reserves means that even a 1 percent change in recovery translates into a staggering quantity of oil. This untapped oil has motivated research on improved oil recovery from unconventional reservoirs using some conventional techniques.”

More than half of the daily oil produced in the United States comes from unconventional formations. And that number is growing as companies tap into the nation’s more than 35 billion barrels of oil in unconventional reserves, according to the U.S. Energy Information Administration.

Companies develop unconventional reservoirs by drilling long horizontal wells and creating hydraulic fractures to allow oil to flow for primary recovery, which currently ranges between 3 to 10 percent of the original oil mass in place. They use commercial software developed based on Darcy’s law to forecast oil recovery and reserves. But, in practice, they do not realize that Darcy’s law — where flow is based on pressure differences — may not be appropriate for shale reservoirs, the researchers say.

After primary recovery, Emami said the existing industry practice is to use a conventional gas injection technique known as “huff ‘n’ puff” that improves oil mobility and increases recovery. During the “huff,” the well and fractures are filled with a high-pressure gas, such as carbon dioxide or methane, which is followed by a short “soaking” period where the well is shut. The well is then opened during the “puff” to allow oil to be produced. However, this conventional technique works poorly for shale formations, researchers say, because diffusion — not pressure differences — is what principally aids oil recovery in these formations containing nanometer-sized pores.

“Imagine perfume being sprayed in the corner of a room with very still air,” Emami said. “Over time, the fragrance will spread from the corner to all parts of the room. That’s diffusion.”

Applied to oil recovery, diffusion is when gas molecules move randomly within oil and reduces its density. This creates a concentration imbalance between oil within fractures and the oil in the shale formation contacting fractures, which increases oil transport into the well.

“Diffusion requires a significant soaking time to be effective, which companies are currently not doing because they are still assuming that pressure differences cause oil to flow to wells,” said Russell Johns, George E. Trimble Chair in Earth and Mineral Sciences and professor of petroleum and natural gas engineering at Penn State.

Companies move quickly with the soak period in between the “huff” and the “puff” because shutting a well is believed to be too costly. Yet, using theoretical calculations, the researchers found that injection of a low-density gas for soak times of two months or more could have massive recovery gains, even when accounting for the downtime. For example, researchers calculated that recovery in a single well could be doubled or tripled using longer soaking periods. They found methane or nitrogen worked better than carbon dioxide because methane diffuses more easily and the total mass of these fluids needed to be injected is less.

This method is particularly relevant, but is not limited, to the vast U.S. shale resources. There are significant implications of this new understanding of the physics to future economic activity associated with sustainable development of unconventional reservoirs, Johns said. It is likely that recoveries can be increased by two to three times in shale oil reservoirs by the proposed techniques, while also showing improvements for condensates that contain significant ethane.

The approach could be implemented in the western Pennsylvania Marcellus or Utica shale, he added.

“Understanding the physics would be like turning on the light in a dark room where you’ve been throwing darts,” Emami said. “Now that you see the target, you’ll know how to properly design the extraction method to get the highest possible results and learn the most from each trial.”

Materials provided by Penn State. Original written by David Kubarek. Note: Content may be edited for style and length.