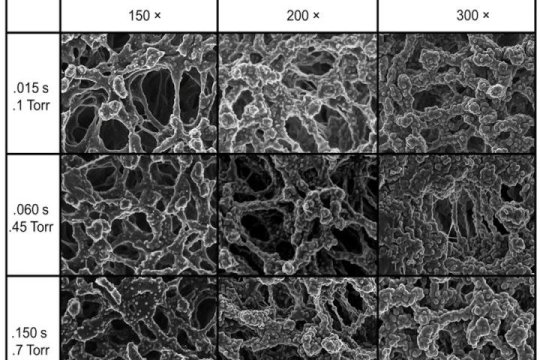 Named for the mythical god with two faces, Janus membranes — double-sided membranes that serve as gatekeepers between two substances — have emerged as a material with potential industrial uses. Creating two distinct “faces” on these delicate surfaces, however, is a process fraught with challenges.

By applying a common high-tech manufacturing technique in an uncommon way, researchers at the U.S. Department of Energy’s (DOE) Argonne National Laboratory have discovered a new way to chemically deposit a second face, resulting in Janus membranes that are more robust and precisely structured than previous incarnations. Recently described in an article in Advanced Materials Interfaces, the patent pending technology could help optimize or enable a wide range of industrial processes, from treating wastewater to making biofuels.

According to Argonne’s Seth Darling, Janus is also the Roman god of passages, making the name even more apt for these membranes that mark the boundary between substances — conveying gas bubbles into liquids, for example, or separating oil and water. Darling is a scientist in Argonne’s Center for Nanoscale Materials (CNM) and director of the laboratory’s Institute for Molecular Engineering (IME), the Argonne-based partner to the University of Chicago’s Institute for Molecular Engineering, of which he is also a fellow.

According to Darling, the Janus membrane research is part of a broader effort at Argonne to advance a “new water cycle” for society, in which water would be treated and reused as many times as possible before being released back into the environment. There’s a whole library of materials that could be used to create new Janus membranes, notes Darling, and each would have different properties and offer potential for myriad new applications.

Typically, Janus membranes are chemically treated on one side of a membrane and not the other, giving it two faces. But the addition of that layer can be difficult to control using current methods, both in terms of the coating’s stability and how deeply it penetrates.

Argonne researchers turned to atomic layer deposition (ALD), a technique commonly used in microelectronics and semiconductor fabrication, to improve the process. Using ALD, they deposited a water-attracting layer of aluminum oxide onto a water-repellent polypropylene membrane, creating a stable Janus membrane that could be used, for example, in fine-bubble aeration of water.

ALD typically works to coat an object thoroughly and uniformly, rather than partially, as is the goal with a Janus membrane.

“It was not intuitive that this strategy would work,” Darling says. “The trick that we play is using a membrane that has very small pores.”

The tiny pores trap the vapors that form the first layer of aluminum oxide before they have a chance to penetrate the membrane completely. By varying the duration and pressure of the aluminum oxide application, the research team was able to produce a strongly bonded coating on one side of the membrane with greater control than is possible using any other technique.

The ability to make Janus membranes with this level of precision and stability could introduce new levels of efficiency in a variety of industrial processes. At wastewater treatment plants, for example, where aeration is used to help break down contaminants, optimizing the bubbling process could reduce energy expenditures. Improved Janus membranes could also accelerate emulsification or demulsification of oil-water mixtures, both important in a wide variety of manufacturing processes. Argonne is investing in development of advanced manufacturing technologies, such as materials with advanced properties and manufacturing processes that are more energy efficient.

The technique emerged from what initially appeared to be an unsuccessful experiment conducted by Ruben Waldman, a graduate student at the University of Chicago’s Institute for Molecular Engineering. Darling is advising Waldman on his doctoral degree.

Waldman was investigating how ALD would affect membranes and noticed that the aluminum oxide was not fully coating the membrane’s bottom side. After consulting with Hao-Cheng Yang, an expert on Janus membranes and a postdoctoral appointee working with Darling at the CNM, Waldman decided to see whether this one-sided deposition could be optimized to achieve the partial layering needed for Janus membranes.