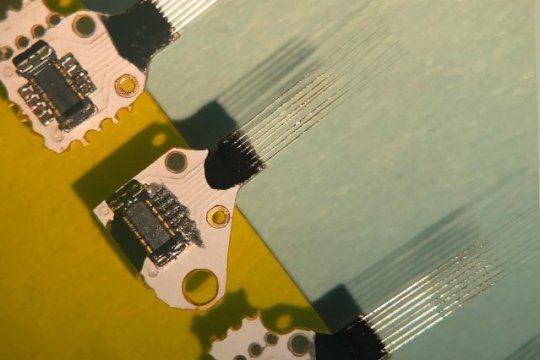 Dopamine, a signaling molecule used throughout the brain, plays a major role in regulating our mood, as well as controlling movement. Many disorders, including Parkinson’s disease, depression, and schizophrenia, are linked to dopamine deficiencies.

MIT neuroscientists have now devised a way to measure dopamine in the brain for more than a year, which they believe will help them to learn much more about its role in both healthy and diseased brains.

“Despite all that is known about dopamine as a crucial signaling molecule in the brain, implicated in neurologic and neuropsychiatric conditions as well as our abilty to learn, it has been impossible to monitor changes in the online release of dopamine over time periods long enough to relate these to clinical conditions,” says Ann Graybiel, an MIT Institute Professor, a member of MIT’s McGovern Institute for Brain Research, and one of the senior authors of the study.

Dopamine is one of many neurotransmitters that neurons in the brain use to communicate with each other. Traditional systems for measuring dopamine — carbon electrodes with a shaft diameter of about 100 microns — can only be used reliably for about a day because they produce scar tissue that interferes with the electrodes’ ability to interact with dopamine.

In 2015, the MIT team demonstrated that tiny microfabricated sensors could be used to measure dopamine levels in a part of the brain called the striatum, which contains dopamine-producing cells that are critical for habit formation and reward-reinforced learning.

Because these probes are so small (about 10 microns in diameter), the researchers could implant up to 16 of them to measure dopamine levels in different parts of the striatum. In the new study, the researchers wanted to test whether they could use these sensors for long-term dopamine tracking.

“Our fundamental goal from the very beginning was to make the sensors work over a long period of time and produce accurate readings from day to day,” Schwerdt says. “This is necessary if you want to understand how these signals mediate specific diseases or conditions.”

To develop a sensor that can be accurate over long periods of time, the researchers had to make sure that it would not provoke an immune reaction, to avoid the scar tissue that interferes with the accuracy of the readings.

The MIT team found that their tiny sensors were nearly invisible to the immune system, even over extended periods of time. After the sensors were implanted, populations of microglia (immune cells that respond to short-term damage), and astrocytes, which respond over longer periods, were the same as those in brain tissue that did not have the probes inserted.

In this study, the researchers implanted three to five sensors per animal, about 5 millimeters deep, in the striatum. They took readings every few weeks, after stimulating dopamine release from the brainstem, which travels to the striatum. They found that the measurements remained consistent for up to 393 days.

“This is the first time that anyone’s shown that these sensors work for more than a few months. That gives us a lot of confidence that these kinds of sensors might be feasible for human use someday,” Schwerdt says.

If developed for use in humans, these sensors could be useful for monitoring Parkinson’s patients who receive deep brain stimulation, the researchers say. This treatment involves implanting an electrode that delivers electrical impulses to a structure deep within the brain. Using a sensor to monitor dopamine levels could help doctors deliver the stimulation more selectively, only when it is needed.

The researchers are now looking into adapting the sensors to measure other neurotransmitters in the brain, and to measure electrical signals, which can also be disrupted in Parkinson’s and other diseases.

“Understanding those relationships between chemical and electrical activity will be really important to understanding all of the issues that you see in Parkinson’s,” Schwerdt says.