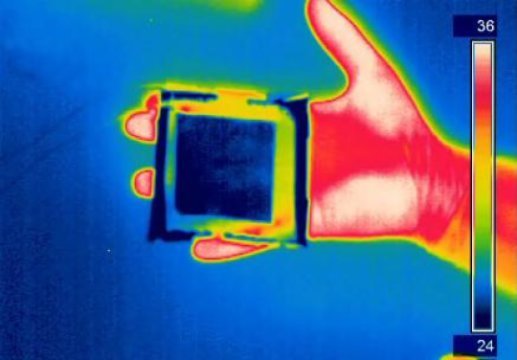 Hunters don camouflage clothing to blend in with their surroundings. But thermal camouflage — or the appearance of being the same temperature as one’s environment — is much more difficult. Now researchers, reporting in ACS’ journal Nano Letters, have developed a system that can reconfigure its thermal appearance to blend in with varying temperatures in a matter of seconds.

Most state-of-the-art night-vision devices are based on thermal imaging. Thermal cameras detect infrared radiation emitted by an object, which increases with the object’s temperature. When viewed through a night-vision device, humans and other warm-blooded animals stand out against the cooler background. Previously, scientists have tried to develop thermal camouflage for various applications, but they have encountered problems such as slow response speed, lack of adaptability to different temperatures and the requirement for rigid materials. Coskun Kocabas and coworkers wanted to develop a fast, rapidly adaptable and flexible material.

The researchers’ new camouflage system contains a top electrode with layers of graphene and a bottom electrode made of a gold coating on heat-resistant nylon. Sandwiched between the electrodes is a membrane soaked with an ionic liquid, which contains positively and negatively charged ions. When a small voltage is applied, the ions travel into the graphene, reducing the emission of infrared radiation from the camo’s surface. The system is thin, light and easy to bend around objects. The team showed that they could thermally camouflage a person’s hand. They also could make the device thermally indistinguishable from its surroundings, in both warmer and cooler environments. The system could lead to new technologies for thermal camouflage and adaptive heat shields for satellites, the researchers say.

The authors acknowledge funding from the European Research Council and the Science Academy, Turkey.