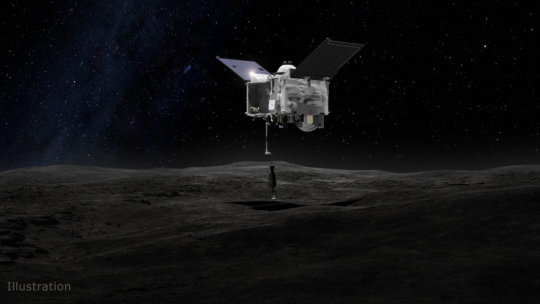 On Dec. 3, after traveling billions of kilometers from Earth, NASA’s OSIRIS-REx spacecraft reached its target, Bennu, and kicked off a nearly two-year, up-close investigation of the asteroid. It will inspect nearly every square inch of this ancient clump of rubble left over from the formation of our solar system. Ultimately, the spacecraft will pick up a sample of pebbles and dust from Bennu’s surface and deliver it to Earth in 2023.

Generations of planetary scientists will get to study pieces of the primitive materials that formed our cosmic neighborhood and to better understand the role asteroids may have played in delivering life-forming compounds to planets and moons.

But it’s not just history that the mission to Bennu will help uncover. Scientists studying the rock through OSIRIS-REx’s instruments in space will also shape our future. As they collect the most detailed information yet about the forces that move asteroids, experts from NASA’s Planetary Defense Coordination Office, who are responsible for detecting potentially hazardous asteroids, will improve their predictions of which ones could be on a crash-course with our planet.

Here is how the OSIRIS-REx mission will support this work:

About a third of a mile, or half a kilometer, wide, Bennu is large enough to reach Earth’s surface; many smaller space objects, in contrast, burn up in our atmosphere. If it impacted Earth, Bennu would cause widespread damage. Asteroid experts at the Center for Near-Earth Object Studies (CNEOS) at NASA’s Jet Propulsion Laboratory in Pasadena, California, project that Bennu will come close enough to Earth over the next century to pose a 1 in 2,700 chance of impacting it between 2175 and 2196. Put another way, those odds mean there is a 99.963 percent chance the asteroid will miss the Earth. Even so, astronomers want to know exactly where Bennu is located at all times.

Astronomers have estimated Bennu’s future trajectory after observing it several times since it was discovered in 1999. They’ve turned their optical, infrared and radio telescopes toward the asteroid every time it came close enough to Earth, about every six years, to deduce features such as its shape, rotation rate and trajectory.

“We know within a few kilometers where Bennu is right now,” said Steven Chesley, senior research scientist at CNEOS and an OSIRIS-REx team member whose job it is to predict Bennu’s future trajectory.

Scientists have estimated Bennu’s trajectory around the Sun far into the future. Their predictions are informed by ground observations and mathematical calculations that account for the gravitational nudging of Bennu by the Sun, the Moon, planets and other asteroids, plus non-gravitational factors.

Given these parameters, astronomers can predict the next four exact dates (in September of 2054, 2060, 2080 and 2135) that Bennu will come within 5 million miles (7.5 million kilometers or .05 astronomical units) of Earth. That’s close enough that Earth’s gravity will slightly bend Bennu’s orbital path as it passes by. As a result, the uncertainty about where the asteroid will be each time it loops back around the Sun will grow, causing predictions about Bennu’s future orbit to become increasingly hazy after 2060.

In 2060, Bennu will pass Earth at about twice the distance from here to the Moon. But it could pass at any point in a 19-mile (30-kilometer) window of space. A very small difference in position within that window will get magnified enormously in future orbits and make it increasingly hard to predict Bennu’s trajectory.

As a result, when this asteroid comes back near Earth in 2080, according to Chesley’s calculations, the best window we can get on its whereabouts is nearly 9,000 miles (14,000 kilometers) wide. By 2135, when Bennu’s shifted orbit is expected to bring it closer than the Moon, its flyby window grows wider, to nearly 100,000 miles (160,000 kilometers). This will be Bennu’s closest approach to Earth over the five centuries for which we have reliable calculations.

“Right now, Bennu has the best orbit of any asteroid in our database,” Chesley said. “And yet, after that encounter in 2135, we really can’t say exactly where it is headed.”

“There are a lot of factors that might affect the predictability of Bennu’s trajectory in the future, but most of them are relatively small,” says William Bottke, an asteroid expert at the Southwest Research Institute in Boulder, Colorado, and a participating scientist on the OSIRIS-REx mission. “The one that’s most sizeable is Yarkvovsky.”

This heat nudge was named after the Polish civil engineer who first described it in 1901: Ivan Osipovich Yarkovsky. He suggested that sunlight warms one side of a small, dark asteroid and some hours later radiates that heat away as the asteroid rotates its hot side into cold darkness. This thrusts the rock pile a bit, either toward the Sun or away from it, depending on the direction of its rotation.

In Bennu’s case, astronomers have calculated that the Yarkovsky effect has shifted its orbit about 0.18 miles (284 meters) per year toward the Sunsince 1999. In fact, it helped deliver Bennu to our part of the solar system, in the first place, from the asteroid belt between Mars and Jupiter over billions of years. Now, Yarkovsky is complicating our efforts to make predictions about Bennu’s path relative to Earth.

Getting face-to-face with the asteroid will help

The OSIRIS-REx spacecraft will use its suite of instruments to transmit radio tracking signals and capture optical images of Bennu that will help NASA scientists determine its precise position in the solar system and its exact orbital path. Combined with existing, ground-based observations, the space measurements will help clarify how Bennu’s orbit is changing over time.

Additionally, astronomers will get to test their understanding of the Yarkovksy effect on a real-life asteroid for the first time. They will instruct the spacecraft to follow Bennu in its orbit about the Sun for about two years to see whether it’s moving along an expected path based on gravity and Yarkovsky theories. Any differences between the predictions and reality could be used to refine models of the Yarkovsky effect.

But even more significant to understanding Yarkovsky better will be the thermal measurements of Bennu. During its mission, OSIRIS-REx will track how much solar heat radiates off the asteroid, and where on the surface it’s coming from-data that will help confirm and refine calculations of the Yarkovsky effect on asteroids.

The spacecraft also will address some open questions about the Yarkovsky theory. One of them, said Chesley, is how do boulders and craters on the surface of an asteroid change the way photons scatter off of it as it cools, carrying away momentum from the hotter side and thereby nudging the asteroid in the opposite direction? OSIRIS-REx will help scientists understand by mapping the rockiness of Bennu’s surface.

“We know surface roughness is going to affect the Yarkovsky effect; we have models” said Chesley. “But the models are speculative. No one has been able to test them.”

After the OSIRIS-REx mission, Chesley said, NASA’s trajectory projections for Bennu will be about 60 times better than they are now.