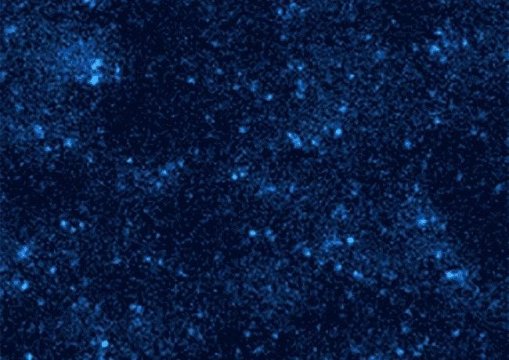 An imaging technique developed at Duke University could make it possible to peer inside cells and watch dozens of different molecules in action at once — by labeling them with short strands of light-up DNA that blink on and off with their own unique rhythm.

“The idea is everything has its own heartbeat,” said first author Shalin Shah, a Ph.D. student in electrical and computer engineering and computer science at Duke. “We call these time signals ‘temporal barcodes.'”

When attached to cells or other objects and observed for enough time, these barcodes could be used to detect and tell apart any number of things at the molecular scale — including particular proteins hidden among the tens of thousands the human body needs to function and grow.

The technique works by using the fleeting interactions between two complementary strands of DNA as they collide in solution. One strand is attached to a molecule that researchers want to study. The other is free-floating and carries a fluorescent dye that lights up when the two strands pair up and then goes dark once they come apart. When viewed under a microscope over time, the binding and unbinding creates a distinct flashing pattern that, decoded, acts as a fingerprint.

Traditional techniques distinguish molecules using different color dyes, or using one color but different DNA sequences and imaging in steps, washing them off one target before moving on to the next.

Shah and his colleagues say they can do better.

Working with Duke computer science professor John Reif and postdoctoral researcher Abhishek Dubey of Oak Ridge National Laboratory, the team’s approach increases the number of different signals it’s possible to distinguish with a single dye color. But rather than rely on multiple DNA sequences like previous single-color methods, they keep the sequence of the free-floating strand the same and instead tweak things like the length or number of repeating sequences on the strand attached to the molecule of interest. This lets them produce flashes with different frequencies, durations and brightness.

In a paper published online April 5 in the journal ACS Synthetic Biology, computer simulations suggest it’s theoretically possible to distinguish as many as 56 different molecules simultaneously, each blinking on and off in the same color. And if multiple dye colors are used that number balloons to thousands. The researchers say their technique is also able to do so at a fraction of the cost of other methods, and without fading under the glare of the microscope over time.

In a companion paper published March 21 in the journal Nano Letters, the team also tested their approach in the lab. Shah and Reif designed seven different DNA devices, attached them to a glass surface, and imaged them using fluorescence microscopy. With less than an hour’s worth of data they were able to use each device’s distinct blinking behavior to distinguish them.

“Our goal is to develop an economical and simple, yet powerful method,” Shah said. “The temporal intensity signals emitted are distinct and can act as a fingerprint.”