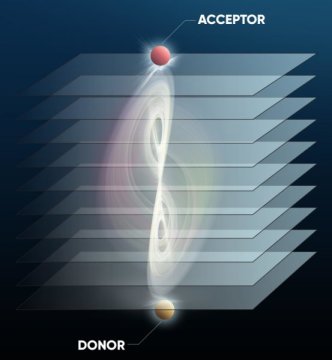 And since FRET is a staple technique in many biological and biophysical fields, this new development could benefit pharmaceuticals, for instance.

“Energy transfer between molecules plays a central role in phenomena such as photosynthesis and is also used as a spectroscopic ruler for identifying structural changes of molecules,” said Vinod Menon, professor of physics in City College’s Division of Science. “However, the process of energy transfer is usually limited in the distance over which it occurs, typically reaching 10 to 20 nm.”

But in the study reported by Menon’s research group in ACS Photonics, the authors demonstrate significant increase in the energy transfer distance (> 15x) — reaching ~ 160 nm. This is accomplished by using a metamaterial that undergoes a topological transition.

The present work sets the stage for the use of spectroscopic rulers for studying a wide array of larger molecular systems which has not been previously possible using standard FRET technique.