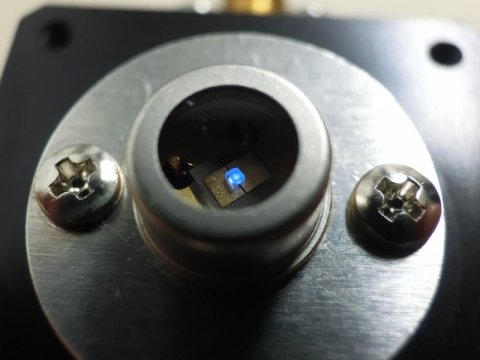 Deep ultraviolet light-emitting diodes (DUV-LEDs) made from aluminium gallium nitride (AlGaN) efficiently transfer electrical energy to optical energy due to the growth of one of its bottom layers in a step-like fashion. This finding, published in the journal Applied Physics Letters, can lead to the development of even more efficient LEDs.

AlGaN-based DUV-LEDs are receiving much research attention due to their potential use in sterilization, water purification, phototherapy, and sunlight-independent high-speed optical communication. Scientists are investigating ways to improve their efficiency in converting electrical energy into optical energy.

Kazunobu Kojima of Tohoku University specializes in quantum optoelectronics, which studies the quantum effects of light on solid-state semiconductor materials. He and colleagues in Japan used a variety of specialized microscopic techniques to understand how the structure of AlGaN-based LEDs affects their efficiency.

They fabricated an AlGaN-based LED by growing a layer of aluminium nitride on top of a sapphire substrate with a very small one degree off-angle. Next, they grew a cladding layer of AlGaN with silicon impurities on top of the aluminium nitride layer. Three AlGaN ‘quantum wells’ were then grown on top of this. Quantum wells are very thin layers that confine subatomic particles called electrons and holes within the dimension that is perpendicular to the layers’ surface, without restricting their movement in the other dimensions. The top quantum well was finally covered with an electron-blocking layer formed of aluminium nitride and AlGaN with magnesium impurities.

The microscopic investigations revealed that terraced steps form between the bottom aluminium nitride and AlGaN layers. These steps affect the shapes of the quantum well layers above them. Gallium-rich stripes form that connect the bottom steps to the small distortions they cause in the upper quantum well layers. These stripes represent micropaths of electric current in the AlGaN cladding layer. These micropaths, together with a strong localization of movement of electrons and holes within the quantum well layers, appears to increase the LEDs’ efficiency in converting electrical energy to optical energy, the researchers say.

The team next plans to use this information to fabricate more efficient AlGaN-based deep ultraviolet LEDs, says Kojima.