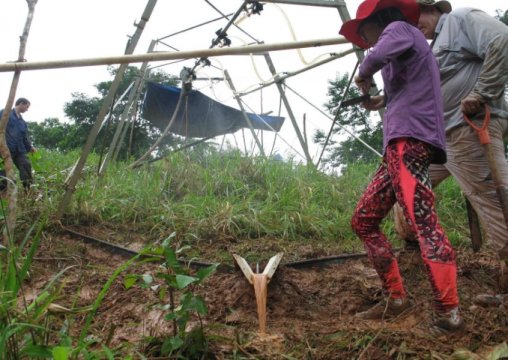 A recently completed research project led by University of Wyoming researchers allowed novel socio-economic analysis aimed at finding out if ecological infrastructure investments are feasible in various scenarios to improve reliability of the Panama Canal.

Fred Ogden, a professor in UW’s Department of Civil and Architectural Engineering and the Haub School of Environment and Natural Resources, was the principal investigator on the research. He is currently a visiting senior scientist and academic-in-residence at the Office of Water Prediction at the U.S. National Water Center in Tuscaloosa, Ala.

“Our study created a large team that included hydrologists, botanists, forest ecologists, soil scientists, geochemists, geophysicists, civil engineers, social scientists and economists — all with the objective of improving our understanding of how people make land management decisions affecting tropical watersheds,” Ogden says. “In particular, we focused on desirable outcomes of increased stream flow during extended dry periods and reduced erosion. This paper represents a summary of the results of our comprehensive study to inform and improve land management decisions providing hydrologic benefits in the tropics.”

Ogden contributed to the paper, titled “Assessing Ecological Infrastructure Investments,” that was published Jan. 7 (today) in the Proceedings of the National Academy of Sciences (PNAS).

The project leveraged existing research infrastructure provided by the Smithsonian Tropical Research Institute’s Agua Salud Project, which provided an experimental setting for testing hypotheses related to the effects of land cover and land use on hydrological response in the watershed that provides all of the river flow that powers the Panama Canal. Seaborne commerce between the United States and other countries represents the dominant use of the Panama Canal.

“Tropical watersheds around the globe are under stress because small watersheds normally provide large amounts of water for large populations and are at risk to drought or other climate stresses,” Ogden says. “The Panama Canal Watershed is very important for U.S. commerce and is one of the few places in the tropics that has both a long-term hydrologic record, and an active system of land management-driven decision making that involves landowners and parties interested in maximizing hydrological benefits.”

This new paper synthesizes the results of a large multiyear, multi-institution, multidisciplinary project. The level of synthesis achieved to make conclusions would have been impossible without the significant contributions from each person involved with the study, Ogden says.

Other contributors to the paper were from the University of Alberta, Yale University, University of Saskatchewan, the U.S. Geological Survey’s Water Mission Area in Boulder, Colo.; and the Smithsonian Tropical Research Institute. Jason Regina, a UW Ph.D. student from Kansas City, Mo., helped collect and analyze hydrological data.

The research project met its goals to advance hydrological understanding in the steep humid tropics; understand factors affecting landowner decisions relative to paid land management plans; and combine these findings into an integrated assessment of the potential of long-term payments for hydrological ecosystem services in the Panama Canal Watershed.

According to the paper, the Panama Canal Authority could offer contracts to private farmers to change land use to increase dry-season water flow and reduce sedimentation. Physical and social constraints limit market supply and scalability. Service delays, from the time payments must be made to landowners to the time services are realized, occur because of lags in ecological change that hinder program feasibility.

Feasible ecological investment depends on the value and demand for the services the ecological infrastructure provides; the ability to change an ecosystem to produce a greater level of service; and the ability, right and willingness for an entity to make changes to an ecosystem.

In many instances, the beneficiaries of ecosystem services lack the ability to implement changes to supply, necessitating a voluntary contracting system that enables payments from water user to water supplier.

These systems are called “payments for ecosystem services” or PES. This is a system of agreed-to monetary or in-kind payments made to land holders, who agree to manage their land in an agreed-upon way, such that the land provides benefits to the person making the payment for some kind of service provided by the landscape. This service could include reduced nutrient, sediment or contaminant runoff; more river flow during droughts or nonrainy periods; and habitat for wildlife.

Vic Adamowicz, one of the paper’s co-authors and a professor in the Department of Resource Economics and Environmental Sociology at the University of Alberta, says his role was to help design and implement the survey of landowners in the Panama Canal Watershed.

The study collected a variety of information on landowners, including demographics, land area and farming systems. However, he adds the most important element was the determination of landowners’ willingness to accept payments in exchange for changing their land use and providing hydrological benefits.

This identified the cost for these people to provide hydrological services. The survey design provided cost information for different land-use changes for land that is currently pasture, but could be changed into a silvopastoral (wood pasture) regime or used to grow coffee or timber. The survey also included a number of ways to ensure the responses were valid and realistic.

“We feel this helps the Panama Canal Authority in assessing the costs of payments for ecosystem services programs and the benefits, in terms of transit revenue, of PES programs,” Adamowicz says. “This is a challenging natural and social science issue that requires understanding of the natural and social systems, and how they interact. We also have described the importance of targeting spatially and landowner preferences for technical assistance and insurance.”

Fenichel says that the team figured out what a centimeter of water in Gatun Lake was worth to the Panama Canal Authority. Gatun Lake is a large artificial lake located to the south of Colon, Panama. It forms a major part of the Panama Canal, carrying ships for 33 kilometers of their trip across the Isthmus of Panama.

In a market where supply equals demand — known as a market clearing equilibrium — a quantity-price pair is experienced. Fenichel used the analogy of a bakery making cookies at a certain price to explain this concept.

“In our analysis, we find a constant amount that the Panama Canal Authority would be willing to pay for a centimeter of water in Gutan Lake but that every centimeter costs more in contracted land-use change,” Fenichel explains. “We order the hectares that could be contracted to make a supply curve. The market clearing equilibrium is the quantity of land that the Panama Canal Authority would contract with at the price that is exactly equal to the willingness to pay for the additional water that adding a hectare provides.”

“As a synthesis paper, it builds on our hydrology research results and uses them to place values on different land management decisions,” Ogden says.

The National Science Foundation funded the study, which took place from 2013-17.