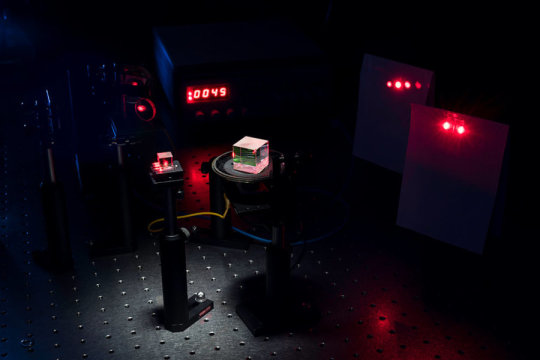 If you want to get the greatest benefit from a beam of light — whether to detect a distant planet or remedy an aberration in the human eye — you need to be able to measure its beam front information.

Now a University of Rochester research team has devised a much simpler way to measure beams of light — even powerful, superfast pulsed laser beams that require very complicated devices to characterize their properties.

The new device will give scientists an unprecedented ability to fine tune even the quickest pulses of light for a host of applications, says Chunlei Guo, professor of optics, who has used femtosecond pulsed laser beams to treat metal surfaces in remarkable ways. And it could render traditional instruments for measuring light beams obsolete.

“This is a revolutionary step forward,” says Guo. “In the past we’ve had to characterize light beams with very complicated, cumbersome interferometric devices, but now we can do it with just one optical cube. It is super compact, super reliable, and super robust.”

The device, developed by Guo and Billy Lam, a PhD student in his lab, is described in Nature Light: Science and Applications. Called a wedged reversal shearing interferometer, it consists of a prism cube, assembled from two right-angle prisms.

-The cube has two angled entrances and splits the beam into two parts.

This creates an extremely stable “Interference” pattern for Guo and his team to measure all the key spatial characteristics of a light beam- its amplitude, phase, polarization, wavelength, and, in the case of pulsed beams, the duration of the pulses. And not just as an average along the entire beam, but at each point of the beam.

This is especially important in imaging applications, Guo says. “If a beam is not perfect, and there is a defect on the image, it’s important to know the defect is because of the beam, and not because of a variation in the object you are imaging,” Guo says.

“Ideally, you should have a perfect beam to do imaging. And if you don’t, you better know it, and then you can correct your measurements. Ultrafast lasers are key for recording dynamic processes, and having an extremely simple but robust device to characterize ultrafast or any type of laser beams are surely important.”

Albert Michaelson demonstrated the first interferometer in the 1880s, using a beam splitter and two mirrors. The core principles remain the same in interferometers used today.

The beam splitter sends the split light on different optical paths towards the mirrors. The mirrors then reflect each split beam back so they recombine at the beam splitter. The different paths taken by the two split beams causes a phase difference which creates an interference fringe pattern. This pattern is then analyzed by a detector to evaluate the wave characteristics.

This approach has worked reasonably well for characterizing continuous wave laser beams because they have a long “coherence” time, allowing them to interfere even after being split, sent along two paths of different lengths, and then recombined, Guo says.

However, given the short duration of a femtosecond pulsed laser beam — about a millionth of a billionth of a second — “Simple interferometer like the shear plate, where the beams reflected from the front and back surface interfere, no longer works.” Guo says. Femtosecond pulsed laser beams would quickly lose their coherence along non-equidistant pathways of a typical interferometer.

The prism cube is designed in such a way to eliminate that problem, he says. The prism cube is the first single element interferometer that can characterize femtosecond or even shorter laser pulses.

Femtosecond laser pulses offer two advantages. Their incredibly short duration is comparable to the timescales at which “very many fundamental processes in nature occur,” Guo says. Those processes include an electron moving around an atom’s core, the “lattice” vibration of atoms and molecules, and the unfolding of biological proteins. So, femtosecond last pulses provide researchers a tool to study and manipulate those processes.