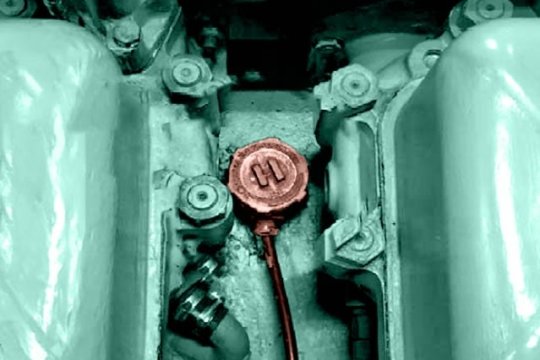 A new system devised by researchers at MIT can monitor the behavior of all electric devices within a building, ship, or factory, determining which ones are in use at any given time and whether any are showing signs of an imminent failure. When tested on a Coast Guard cutter, the system pinpointed a motor with burnt-out wiring that could have led to a serious onboard fire.

The new sensor, whose readings can be monitored on an easy-to-use graphic display called a NILM (non-intrusive load monitoring) dashboard, is described in the March issue of IEEE Transactions on Industrial Informatics, in a paper by MIT professor of electrical engineering Steven Leeb, recent graduate Andre Aboulian MS ’18, and seven others at MIT, the U.S. Coast Guard, and the U.S. Naval Academy. A second paper will appear in the April issue of Marine Technology, the publication of the Society of Naval Architects and Marine Engineers.

The system uses a sensor that simply is attached to the outside of an electrical wire at a single point, without requiring any cutting or splicing of wires. From that single point, it can sense the flow of current in the adjacent wire, and detect the distinctive “signatures” of each motor, pump, or piece of equipment in the circuit by analyzing tiny, unique fluctuations in the voltage and current whenever a device switches on or off. The system can also be used to monitor energy usage, to identify possible efficiency improvements and determine when and where devices are in use or sitting idle.

The technology is especially well-suited for relatively small, contained electrical systems such as those serving a small ship, building, or factory with a limited number of devices to monitor. In a series of tests on a Coast Guard cutter based in Boston, the system provided a dramatic demonstration last year.

About 20 different motors and devices were being tracked by a single dashboard, connected to two different sensors, on the cutter USCGC Spencer. The sensors, which in this case had a hard-wired connection, showed that an anomalous amount of power was being drawn by a component of the ship’s main diesel engines called a jacket water heater. At that point, Leeb says, crewmembers were skeptical about the reading but went to check it anyway. The heaters are hidden under protective metal covers, but as soon as the cover was removed from the suspect device, smoke came pouring out, and severe corrosion and broken insulation were clearly revealed.

“The ship is complicated,” Leeb says. “It’s magnificently run and maintained, but nobody is going to be able to spot everything.”

Lt. Col. Nicholas Galanti, engineer officer on the cutter, says “the advance warning from NILM enabled Spencer to procure and replace these heaters during our in-port maintenance period, and deploy with a fully mission-capable jacket water system. Furthermore, NILM detected a serious shock hazard and may have prevented a class Charlie [electrical] fire in our engine room.”

The system is designed to be easy to use with little training. The computer dashboard features dials for each device being monitored, with needles that will stay in the green zone when things are normal, but swing into the yellow or red zone when a problem is spotted.

Detecting anomalies before they become serious hazards is the dashboard’s primary task, but Leeb points out that it can also perform other useful functions. By constantly monitoring which devices are being used at what times, it could enable energy audits to find devices that were turned on unnecessarily when nobody was using them, or spot less-efficient motors that are drawing more current than their similar counterparts. It could also help ensure that proper maintenance and inspection procedures are being followed, by showing whether or not a device has been activated as scheduled for a given test.

“It’s a three-legged stool,” Leeb says. The system allows for “energy scorekeeping, activity tracking, and condition-based monitoring.” But it’s that last capability that could be crucial, “especially for people with mission-critical systems,” he says. In addition to the Coast Guard and the Navy, he says, that includes companies such as oil producers or chemical manufacturers, who need to monitor factories and field sites that include flammable and hazardous materials and thus require wide safety margins in their operation.

One important characteristic of the system that is attractive for both military and industrial applications, Leeb says, is that all of its computation and analysis can be done locally, within the system itself, and does not require an internet connection at all, so the system can be physically and electronically isolated and thus highly resistant to any outside tampering or data theft.

Although for testing purposes the team has installed both hard-wired and noncontact versions of the monitoring system — both types were installed in different parts of the Coast Guard cutter — the tests have shown that the noncontact version could likely produce sufficient information, making the installation process much simpler. While the anomaly they found on that cutter came from the wired version, Leeb says, “if the noncontact version was installed” in that part of the ship, “we would see almost the same thing.”