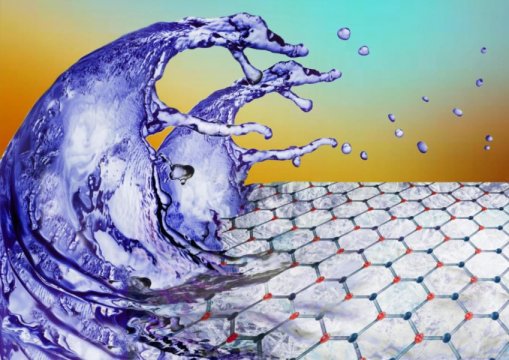 Yale-NUS Associate Professor of Science (Physics) Shaffique Adam is the lead author for a recent work that describes a model for electron interaction in Dirac materials, a class of materials that includes graphene and topological insulators, solving a 65-year-old open theoretical problem in the process. The discovery will help scientists better understand electron interaction in new materials, paving the way for developing advanced electronics such as faster processors. The work was published in the peer-reviewed academic journal Science on 10 August 2018.

For more than 65 years, this problem was relegated to a mathematical curiosity, because Dirac materials where the Coulomb threshold was reached had never been made. Today, however, we routinely make use of quantum materials for applications in technology, such as transistors in processors, where the electrons are engineered to have desired properties, including those which push the Coulomb force past this threshold. But the effects of strong electron-electron interaction can only be seen in very clean samples.

In the work immediately following his PhD, Assoc Prof Adam proposed a model to describe experimentally available Dirac materials that were “very dirty” (contains a lot of impurities). However, in the years that followed, newer and cleaner materials have been made, and this previous theory no longer worked.

In this latest work titled, “The role of electron-electron interactions in two-dimensional Dirac fermions,” Assoc Prof Adam and his research team have developed a model which explains electron interactions past the Coulomb threshold in all Dirac materials by using a combination of numerical and analytical techniques.

In this research, the team designed a method to study the evolution of physical observables in a controllable manner and used it to address the competing effects of short-range and long-range parts in models of the Coulomb interaction. The researchers discovered that the velocity of electrons (the “flow” speed) in a material could decrease if the short-range interaction that favoured the insulating, “frozen” state dominated. However, the velocity of electrons could be enhanced by the long-range component that favoured the conducting, “liquid” state. With this discovery, scientists can better understand long-range interactions of electrons non-perturbatively — something that previous theories were not able to explain — and serves as useful predictors for experiments exploring the long-range-interaction divergence in Dirac electrons when they transition between conducting to insulating phases.

This improved understanding in the evolution of the electron velocity during the phase transition paves the way to help scientists develop low heat dissipation devices for electronics. Assoc Prof Adam explains, “The higher the electron velocity, the faster transistors can be switched on and off. However, this faster processor performance comes at the price of increased power leakage, which produces extra heat, and this heat will counteract the performance increase granted by the faster switching. Our findings on electron velocity behaviour will help scientists engineer devices that are capable of faster switching but low power leakage.”

Assoc Prof Adam adds, “Because the mechanism in our new model harnesses the Coulomb force, it would cost less energy per switch compared to mechanisms available currently. Understanding and applying our new model could potentially usher in a new generation of technology.”

Materials provided by Yale-NUS College. Note: Content may be edited for style and length.