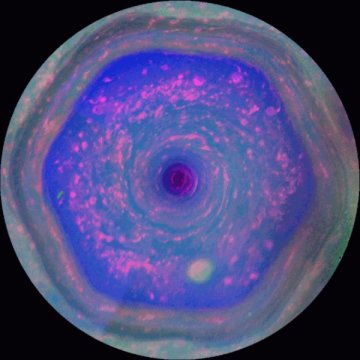 The long-lived international Cassini mission has revealed a surprising feature emerging at Saturn’s northern pole as it nears summertime: a warming, high-altitude vortex with a hexagonal shape, akin to the famous hexagon seen deeper down in Saturn’s clouds. This suggests that the lower-altitude hexagon may influence what happens up above, and that it could be a towering structure spanning hundreds of kilometres in height.

When Cassini arrived at the Saturnian system in 2004, the southern hemisphere was enjoying summertime, while the northern was in the midst of winter. The spacecraft spied a broad, warm, high-altitude vortex at Saturn’s southern pole, but none at the planet’s northern pole.

A new long-term study has now spotted the first glimpses of a northern polar vortex forming high in the atmosphere as Saturn’s northern hemisphere approached summertime. This warm vortex sits hundreds of kilometres above the clouds, in a layer of atmosphere known as the stratosphere, and reveals an unexpected surprise.

“The edges of this newly-found vortex appear to be hexagonal, precisely matching a famous and bizarre hexagonal cloud pattern we see deeper down in Saturn’s atmosphere,” says Leigh Fletcher of the University of Leicester, UK, lead author of the new study.

“While we did expect to see a vortex of some kind at Saturn’s north pole as it grew warmer, its shape is really surprising. Either a hexagon has spawned spontaneously and identically at two different altitudes, one lower in the clouds and one high in the stratosphere, or the hexagon is in fact a towering structure spanning a vertical range of several hundred kilometres.”

Saturn’s cloud levels host the majority of the planet’s weather, including the pre-existing north polar hexagon. This feature was discovered by NASA’s Voyager spacecraft in the 1980s and has been studied for decades; it is a long-lasting wave potentially tied to Saturn’s rotation, a type of phenomenon also seen on Earth in structures such as the Polar Jet Stream.

Its properties were revealed in detail by Cassini, which observed it in multiple wavelengths — from the ultraviolet to the infrared — using instruments including its Composite Infrared Spectrometer (CIRS). However, at the start of the mission this instrument could not peer further up in the northern stratosphere, which had temperatures around -158 degrees Celsius — some 20 degrees too cold for reliable CIRS infrared observations — leaving these higher-altitude regions relatively unexplored for many years.

“Saturn only began to emerge from the depths of northern winter in 2009, and gradually warmed up as the northern hemisphere approached summertime.”

A strange process at play within Saturn’s atmosphere sped up this warming: as air sank at the north pole, the upper hexagon warmed increasingly quickly, and the transport of air downwards made the abundance of several minor species more concentrated. The increased temperature allowed Fletcher and colleagues to study the polar vortex in infrared light.

“We were able to use the CIRS instrument to explore the northern stratosphere for the first time, from 2014 onwards,” adds Guerlet. “As the polar vortex became more and more visible, we noticed it had hexagonal edges, and realised that we were seeing the pre-existing hexagon at much higher altitudes than previously thought.”

This indicates that Saturn’s two poles behave very differently — there was no hexagon at the south pole, either at the cloud tops or above, when it was observed early in Cassini’s mission during southern summer. The northern vortex is also nowhere near as mature as the southern vortex, as it is cooler, and displays different dynamics from its southern counterpart.

“This could mean that there’s a fundamental asymmetry between Saturn’s poles that we’re yet to understand, or it could mean that the north polar vortex was still developing in our last observations and kept doing so after Cassini’s demise,” adds Fletcher. The Cassini mission came to an end in September 2017.

The presence of a hexagon way up in Saturn’s northern stratosphere, hundreds of kilometres above the clouds, suggests that there is much more to learn about the dynamics at play in the gas giant’s atmosphere.

A single, towering hexagonal structure that stretches up through the atmosphere would be unlikely given that wind conditions change considerably with altitude. However, by investigating the atmospheric properties in the northern region, Fletcher and colleagues also determined that waves like the hexagon should be unable to propagate upwards — they should remain trapped in the cloud-tops, as previously thought.

“One way that wave ‘information’ can leak upwards is via a process called evanescence, where the strength of a wave decays with height but is just about strong enough to still persist up into the stratosphere,” explains Fletcher. “We simply need to know more. It’s quite frustrating that we only discovered this stratospheric hexagon right at the end of Cassini’s lifespan.”

Understanding how and why Saturn’s north polar vortex has assumed a hexagonal shape will shed light on how phenomena deeper down in an atmosphere can influence the environment high up above, something that is of particular interest to scientists trying to figure out how energy is transported around in planetary atmospheres.

Saturn’s north polar region is expected to continue developing in coming years; the northern hemisphere passed summer solstice in May 2017, and is on track for its autumn equinox in 2024.

“Saturn’s northern hexagon is an iconic feature on one of the most charismatic members of the Solar System, so to discover that it still holds major mysteries is very exciting,” says Nicolas Altobelli, ESA Project Scientist for the Cassini-Huygens mission.

“The Cassini spacecraft continued to provide new insights and discoveries right up to the very end. Without a capable spacecraft like Cassini, these mysteries would have remained unexplored. It shows just what can be accomplished by an international team sending a sophisticated robotic explorer to a previously unexplored destination — with results that keep flowing even when the mission itself has ended.”