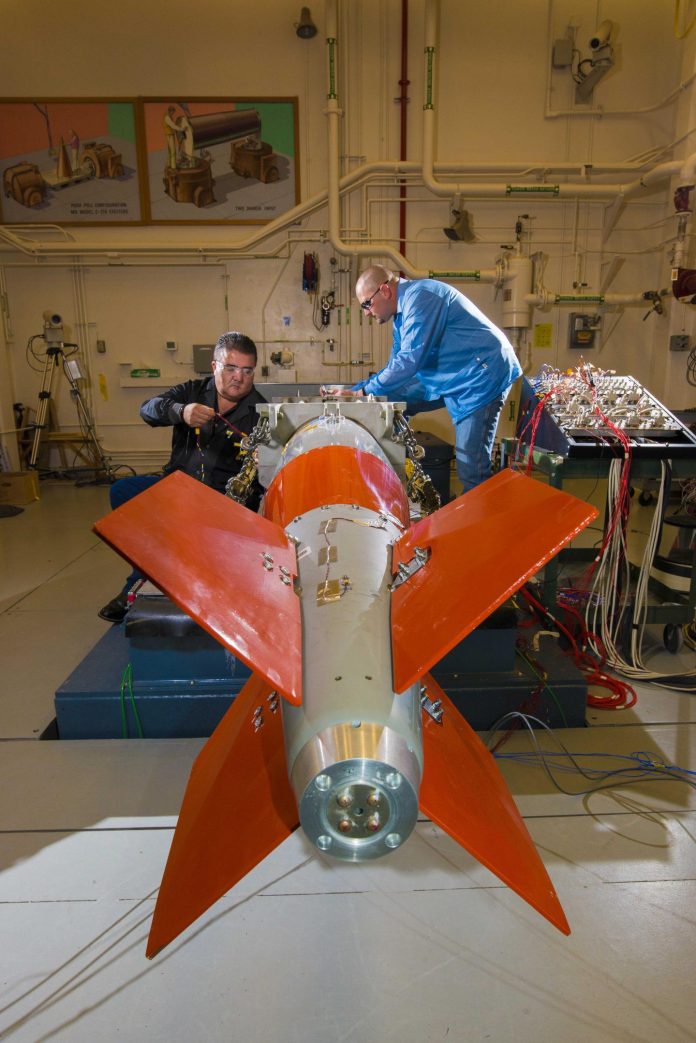 “The Combined Engineering Judgment is an important step toward ensuring the B61-12 Life Extension Program is on track, and Sandia is meeting design and development requirements for the weapon to take its place as part of the U.S. nuclear deterrent,” said Sandia’s Delegated Chief Engineer for Nuclear Weapons Ernie Wilson.

Sandia is the design and engineering lab for non-nuclear components of the nation’s nuclear stockpile, including the B61-12. In addition, Sandia serves as the technical integrator for the complete weapon, assuring that the system meets requirements as one unit and not just as individual parts.

The successful review was based on qualification evidence presented from an independent internal assessment by Sandia’s Weapons Assessment Team that has been evaluating data from day one of B61-12 Life Extension Program.

A life extension program allows scientists and engineers to address the aging of nuclear weapons components by requalifying usable parts, remanufacturing old parts using the original specifications or redesigning parts with modern technology when the original technology is no longer available.

“It’s that enormous amount of data that gives us confidence to execute this review and continue moving forward,” said Scott Lindblom, a Sandia qualification manager in the B61-12 program at the time and now a senior manager. “This successful review validates Sandia’s work on the B61-12 LEP up to now, and it brings in an independent review team to say, ‘Yes, really, really you are doing the right things.'”

The Weapons Assessment Team is a group of about 10 Sandia weapons experts brought together to do an internal review of the weapons system that is independent from the design, development and testing teams, said Todd Simmermacher, a Sandia nuclear safety assessment manager. The team’s work reviewing and assessing the design and qualification data is continuous from the beginning of the program.

That qualification data come from tests of the whole weapon system and each component to ensure everything always works when authorized by the president and never under any other circumstances.

“The team is constantly reviewing and assessing the design and data to the best of our ability as the weapon’s team produces it,” Simmermacher said. “The B61-12 evidence showed that the system is meeting its safety and security requirements.”

Impact, vibration, drops, extreme temperatures and massive electrical impulses are some of the physical tests conducted to show a component and the entire B61-12 weapon system will operate as intended. Combining hours of computational analysis and advanced computer algorithms with that field-testing, including flight tests, ensures components, systems and warhead integration are safe and secure enough to prevent unplanned detonations or unauthorized use of the weapon.

The B61 first entered service 50 years ago. Numerous modifications have been made since to increase safety and reliability. The B61-12 consolidates and replaces most of the previous variants, will extend the bomb’s service life by at least 20 years, and will continue to ensure its safety, security and effectiveness. The National Nuclear Security Administration plans to produce the first unit of the B61-12 in fiscal year 2022.

Sandia’s Combined Engineering Judgment review has added a high degree of confidence in the B61-12 engineering and design, Lindblom said.

It was the second such review and showed that the gaps identified earlier had been closed, he said. “Nothing was a surprise, and Sandia is moving forward on the B61-12 LEP with trusted data and design.”