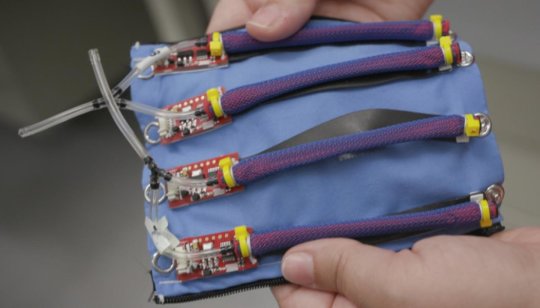 When you think of robotics, you likely think of something rigid, heavy, and built for a specific purpose. New “Robotic Skins” technology developed by Yale researchers flips that notion on its head, allowing users to animate the inanimate and turn everyday objects into robots.

Developed in the lab of Rebecca Kramer-Bottiglio, assistant professor of mechanical engineering & materials science, robotic skins enable users to design their own robotic systems. Although the skins are designed with no specific task in mind, Kramer-Bottiglio said, they could be used for everything from search-and-rescue robots to wearable technologies. The results of the team’s work are published today in Science Robotics.

The skins are made from elastic sheets embedded with sensors and actuators developed in Kramer-Bottiglio’s lab. Placed on a deformable object — a stuffed animal or a foam tube, for instance — the skins animate these objects from their surfaces. The makeshift robots can perform different tasks depending on the properties of the soft objects and how the skins are applied.

Robots are typically built with a single purpose in mind. The robotic skins, however, allow users to create multi-functional robots on the fly. That means they can be used in settings that hadn’t even been considered when they were designed, said Kramer-Bottiglio.

Additionally, using more than one skin at a time allows for more complex movements. For instance, Kramer-Bottiglio said, you can layer the skins to get different types of motion. “Now we can get combined modes of actuation — for example, simultaneous compression and bending.”

To demonstrate the robotic skins in action, the researchers created a handful of prototypes. These include foam cylinders that move like an inchworm, a shirt-like wearable device designed to correct poor posture, and a device with a gripper that can grasp and move objects.

Kramer-Bottiglio said she came up with the idea for the devices a few years ago when NASA put out a call for soft robotic systems. The technology was designed in partnership with NASA, and its multifunctional and reusable nature would allow astronauts to accomplish an array of tasks with the same reconfigurable material. The same skins used to make a robotic arm out of a piece of foam could be removed and applied to create a soft Mars rover that can roll over rough terrain. With the robotic skins on board, the Yale scientist said, anything from balloons to balls of crumpled paper could potentially be made into a robot with a purpose.

“One of the main things I considered was the importance of multifunctionality, especially for deep space exploration where the environment is unpredictable,” she said. “The question is: How do you prepare for the unknown unknowns?”

For the same line of research, Kramer-Bottiglio was recently awarded a $2 million grant from the National Science Foundation, as part of its Emerging Frontiers in Research and Innovation program.

Next, she said, the lab will work on streamlining the devices and explore the possibility of 3D printing the components.