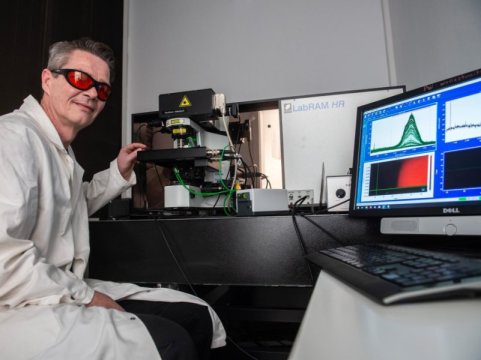 Silicate glass has many applications, including the use as a nuclear waste form to immobilize radioactive elements from spent fuel. However, it has one disadvantage — it corrodes when it comes into contact with aqueous solutions. Scientists at the University of Bonn were able to observe in detail which processes take place. The results have now been published in the journal Nature Materials.

The mineralogists and geochemists at the University of Bonn used the so-called confocal Raman spectroscopy for their study, where a laser beam is focused on a sample through a microscope. The light interacts with the molecules in the material, causing them to vibrate. Individually backscattered photons change their color depending on the structure and the chemical properties of the sample. This phenomenon is known as the Raman effect. The originally monochromatic light now also contains other color components. The color spectrum provides detailed insights into the structure and composition of the matter that is excited by the laser beam.

What makes this method even more interesting: The laser can be focused to a specific point in the space with an accuracy of a few thousandths of a millimeter. This facilitates studying the sample point by point, but not only on its surface: If the sample is transparent, the beam can also be focused into internal areas. “And that’s exactly what we did,” explains Prof. Dr. Thorsten Geisler-Wierwille from the Institute for Geosciences and Meteorology at the University of Bonn.

Opal layer at the glass surface

The researchers used a small piece of silicate glass as a sample that reacted with an aqueous solution in a specially developed heating vessel. It was possible to move the vessel in steps of one thousandth of a millimeter under the Raman microscope — to the right, left, forward, and backward, but also up and down. “We scanned the glass point by point and recorded a Raman spectrum while it reacted with the solution,” says Lars Dohmen, who is currently completing his doctorate under the supervision of Geisler-Wierwille. “This allowed us to investigate the reaction almost in real time. This currently works at temperatures of up to 150 degrees, which, for instance, are also expected in a nuclear repository.”

The results indicate that silicate glass quickly dissolves when it comes into contact with aqueous solutions — almost like a sugar cube in a cup of coffee. However, while the sugar molecules are quickly distributed evenly in the water by diffusion, this is not the case during glass corrosion: Part of the resulting dissolved silica seems to remain near the surface of the glass. At some point, its concentration becomes so high that it solidifies.

“We then also speak of silica precipitation,” explains Prof. Geisler-Wierwille. “Silica molecules in the solution interlink to form aggregates only a few millionths of a millimeter in size, which are deposited at the glass surface and mature into an opal-like state.” However, the researchers were able to show that this opal layer does not provide perfect protection against water. Instead, the dissolution-precipitation front continues to eat its way into the glass. As a result, the glass is gradually replaced by opal, although at a decreasing velocity. “For the first time, we have experimentally demonstrated that a boundary solution with dissolved silica forms between the opal layer and the underlying glass,” explains Geisler-Wierwille. “As the thickness of the opal layer increases, it increasingly prevents the silica solution from being transported away from the reaction interface. “We suspect that it eventually gels to a viscous mass, which dramatically slows down glass dissolution.”

In the study, this was already the case after 25 thousandths of a millimeter. “Even though the reaction became very slow, it cannot be ruled out that this corrosion process will release radioactive elements over long periods of time,” emphasizes Geisler-Wierwille. However, glasses used for the vitrification of nuclear waste are by far more stable against water than the investigated glass. “We want to extend our experiments to these glass types in the near future,” emphasizes the researcher. Studies with silicate glass in which radioactive elements are already incorporated are also planned. The researchers and their partners want to investigate the influence of self-irradiation damage in the glass on its corrosion resistance. “The current work should mainly prove that our new method can provide far-reaching insights into these processes,” says Geisler-Wierwille.

The level of interest shown by industry in this work is also reflected in the financing of the pilot project: One of the sponsors of the study is the renowned glass manufacturer Schott AG.