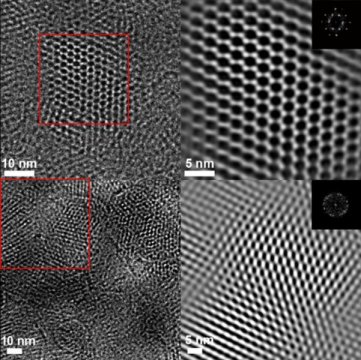 Hollow molecular structures known as COFs (covalent organic frameworks), which could serve as selective filters or containers for other substances and have many other potential uses, also tend to suffer from an inherent problem: It’s difficult to keep a network of COFs connected in harsh chemical environments.

The conventional chemistry for linking building blocks into 2D COF sheets or 3D COF frameworks is reversible. This reversibility makes the connections within COFs weak and unstable in some chemical environments, limiting the practical applications of these COF materials.

Now, a team at the Department of Energy’s Lawrence Berkeley National Laboratory (Berkeley Lab) has used a chemical process discovered decades ago to make the linkages between COFs much more sturdy, and to give the COFs new characteristics that could expand their applications.

“It’s like a ‘weaving’ and welding approach,” said Yi Liu, a staff scientist at Berkeley Lab’s Molecular Foundry. Liu led a team that found out how to strengthen the weakest links binding COFs.

This one simple chemical approach targets a chemical reaction to the area of these weak links, forming resilient bonds that were shown to hold up — like a strong weld — to harsh chemical environments during experiments.

The team’s findings are detailed in a study, reported in the journal Nature Communications, that details how the technique works.

“Here we show that these bonds are exceptionally stable to a variety of chemicals. We’ve tried harsh conditions and it still sustains these bonds,” Liu said. “This beats everything reported in the literature.”

The chemical transformation, he noted, makes the bonds between COFs more useful by changing their electronic and optical (light-based) properties, for example. “They can transfer electrons more easily after the reaction,” he said, so that 2D layers of these strongly bound COFs behave more like graphene, another exotic 2D material that exhibits special electronic and optical properties.

Xinle Li, a postdoctoral fellow at the Molecular Foundry and the study’s lead author, said, “We gave that reaction process, first reported in the 1960s, a new life. We applied it to COFs for the first time.”

COFs have been heavily studied because they are highly tunable and can be composed entirely of light elements like carbon, hydrogen, nitrogen, and oxygen — unlike structures known as MOFs (metal-organic frameworks) that contain heavier elements. Scientists can make COFs with different pore sizes that can impact their function, changing what can pass through them or what can be contained within these pores.

This could make the COF-based materials useful in systems that filter unwanted chemicals from water, for example, reduce carbon dioxide into other value-added chemical forms, or serve as highly efficient facilitators for other types of chemical processes.

An important aspect of the study was the use of advanced imaging techniques, such as high-resolution transmission electron microscopy (HRTEM) at the Molecular Foundry to see the structure of the bound COFs, Liu and Li said.

The researchers said the images obtained, which clearly show the honeycomb-like lattice of 2D COFs, are among the best images yet of COFs, confirming the chemical changes in the COFs down to a fraction of a nanometer (a nanometer is 1 billionth of a meter).

To carry out the chemical modification reaction, the researchers placed the COFs in a liquid solution that was heated to about 230 degrees Fahrenheit, and then stirred it up.

Researchers said it should be possible to scale up the amount of the COF-based materials, and the team has already experimented with using COF sheets with other material layers to customize the function of the combined material.

The team plans to test how to better automate the production of these COF materials, and will also pursue ways to make the reaction process more efficient. The team will explore theories to help understand and improve upon the COF-altering chemistry.

“We want to make this chemical modification process even faster and better,” Li said. “We hope we can make the reaction conditions milder, and further increase the chemical stability and functionality of COFs.”

The team’s work is one of the first published efforts of a new program at the Molecular Foundry aiming to advance “combinatorial nanoscience” that is focused on using high throughput processes, in combination with theory and imaging technology, to create and study nanostructures that are components in new materials with enhanced properties.