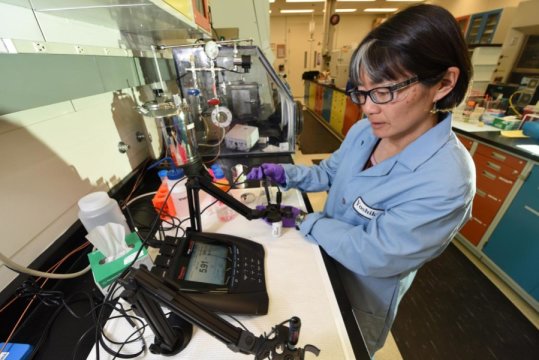 Researchers have examined a method to extract rare-earth elements from mining waste that could provide the world with a reliable supply of the valuable materials.

The research, led by Idaho National Laboratory and Rutgers University with support from the Critical Materials Institute, is online and in an upcoming issue of the Journal of Chemical Thermodynamics.

Rare-earth elements (REEs) — a class of metallic elements including neodymium and dysprosium — are necessary for the manufacture of many high-tech devices including cellphones, computers and wind turbines.

REEs are difficult to obtain, and the U.S. currently does not produce a domestic supply. This scarcity leaves manufacturers vulnerable to supply disruptions.

But large amounts of REEs exist in phosphogypsum (PG), a waste product from producing phosphoric acid from phosphate rock. The U.S. mined approximately 28 million tons of phosphate rock in 2017. Phosphoric acid is used in the production of fertilizers and other products.

Researchers estimate that more than a billion tons of PG waste are sitting in piles at storage sites across the country, particularly in Idaho and Florida. Worldwide, about 100,000 tons of rare-earth elements per year end up in PG waste. That’s almost as much as the nearly 126,000 tons of rare-earth oxides produced worldwide each year.

To test whether rare-earth elements could be obtained from PG, researchers doped synthetic phosphogypsum with six rare-earth elements — yttrium, cerium, neodymium, samarium, europium and ytterbium. They then studied various solutions that could be used to extract the elements.

One solution in particular, a mixture of chemicals produced by the bacterium Gluconobacter oxydans, was especially intriguing for REE recovery. Gluconobacter is a common bacterium found readily in the environment, including on rotting fruit.

Gluconobacter produces organic acids such as gluconic acid that dissolve the REEs from the surrounding material and pulls them into solution in a process called “bioleaching.” The REEs could then be precipitated from the solution and purified for industrial use.

In the recent study, the mixture of chemicals produced by Gluconobacter outperformed other acids such as phosphoric acid and gluconic acid alone. Sulfuric acid worked best of the chemicals studied.

The big difference between this study and the team’s past research on using Gluconobacter to recover REEs from end-of-life products or industrial wastes is that PG is abundant enough to alleviate the world’s REE supply shortages, said INL researchers Yoshiko Fujita and David Reed, both scientists in the Biological and Chemical Processing Department at INL.

Earlier studies have shown that using Gluconobacter for bioleaching can be economically viable and cause fewer impacts on the environment, especially when compared with sulfuric acid. Conventional methods to extract rare-earth elements from ores generate millions of tons of toxic and acidic pollutants.

“With bioleaching, we are using an organic acid that is less harmful to the environment,” Fujita said.

Two major challenges exist with using PG as a source of REEs. First, PG is often mildly radioactive. “There are typically uranium and thorium in these phosphate deposits,” Fujita said. “But there are some deposits that are low in these elements.”

Second, PG is classified as a waste material, which may cause regulatory agencies to restrict access to PG piles.

Still, the interest in tapping this potentially large source of REEs is high. Mining companies have already begun inquiring about the process. Next, researchers hope to test bio-acid on industrial PG and other wastes that are generated during phosphoric acid production and also contain rare-earth elements.

“I think there’s such a vast reserve there,” Reed said. “At some point, push comes to shove and we’re going to have to look at PG as a viable resource. If something happens to the flow of REE material, these PG sources are significant.”

Tech: Cardiac scar tissue: A factor which regulates its size

Report: Loss of a co-twin linked to heightened psychiatric risk

Report: Loss of a co-twin linked to heightened psychiatric risk