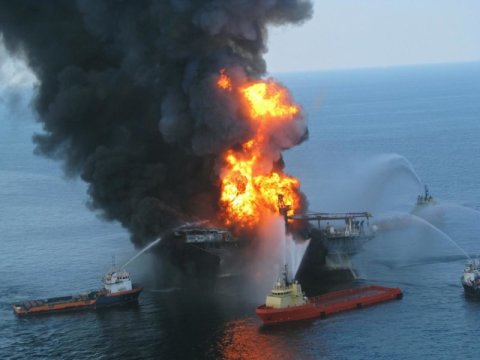 A new study of the Deepwater Horizon response showed that massive quantities of chemically engineered dispersants injected at the wellhead — roughly 1,500 meters (4,921 feet) beneath the surface — were unrelated to the formation of the massive deepwater oil plume.

A University of Miami (UM) Rosenstiel School of Marine and Atmospheric Science-led research team analyzed polycyclic aromatic hydrocarbons (PAHs), the most toxic components of petroleum, based on the BP Gulf Science Data’s extensive water chemistry samples taken within a 10-kilometer (6-mile) radius of the blowout site. The results of this analysis demonstrated that substantial amounts of oil continued to surface near the response site, despite 3,000 tons of subsea dispersants injection (or SSDI) — a new spill response strategy meant to curb the spread of oil and facilitate its degradation.

Dispersants application to manage surface oil spills has been shown to break the oil into small, easily dissolved droplets. However, the Deepwater Horizon was very different in that the oil entered the system at depth. The turbulent energy and pressure at such immense depths not only contributed to the rapid expansion of the spill, but these natural forces helped disperse oil in micro-droplets and render the dispersant ineffective and unnecessary.

“The results of this study are critically important,” said the study’s coauthor Samantha Joye from the University of Georgia. “This work shows clearly that the eruptive nature of the Macondo discharge was more than sufficient to generate the deepwater oil plume. Further, application of dispersant did not increase the amount of oil in the aqueous phase or change the distribution of oil over depth. These findings should change the way we think about spill response and calls for a reconsideration and reprioritization of response measures.”

The team’s research, led by Claire Paris, professor of ocean sciences at UM, founded on an unprecedented volume of data publicly available through the Gulf of Mexico Research Initiative Information and Data Cooperative (GRIIDC), demonstrated that the formation of the massive deepwater oil plumes was unrelated to the new response. They further show, in agreement with previous studies, that plumes of oil persisted in the Gulf months after the spewing wellhead was capped 87 days later. The powerful chemical dispersant, called Corexit, may have added to the ecological damage by suppressing the growth of natural oil-degrading bacteria and by increasing the toxicity of the oil itself.

“Our earlier work using computer modeling and high-pressure experimental approaches suggested that pumping chemical dispersants at the spewing wellhead may have had little effect on the amount of oil that ultimately surfaced. But empirical evidence was lacking until the release of the BP Gulf Science Data. When completely different approaches converge to the same conclusion, it is time to listen,” said Paris. “There is no real trade-off because there is no upside in using ineffective measures that can worsen environmental disasters.”

As the oil industry drills in deeper and deeper water, it must find alternative strategies to manage blowouts, says the study’s authors. The “capping stack” method in which BP used to stop the wellhead outflow may be a more effective first response strategy. Bio-surfactants, which are less toxic and more efficacious to biodegeneration, may offer a viable alternative for oil spills in shallow waters, according to the researchers.

As part of the massive response and damage assessment effort, a robust data collection and management strategy was employed, including the BP Gulf Science Data water chemistry data used in this new study and compiled under the Gulf of Mexico Research Initiative.

“This type of data management is a strategic asset enhancing both science and management as it allows scientists to use data-driven approaches and test important hypotheses for better understanding and managing future oil spills,” said Igal Berenshtein, a coauthor of the study and postdoctoral researcher at the UM Rosenstiel School.

On April 20, 2010, the Deepwater Horizon oil rig exploded, releasing 210 million gallons of crude oil into the Gulf of Mexico for a total of 87 days, making it the largest oil spill in U.S. history.

The study, titled “BP Gulf Science Data Reveals Ineffectual Sub-Sea Dispersant Injection for the Macondo Blowout,” was published on Oct. 30 in the journal Frontiers in Marine Science’s Marine Pollution section. The study’s authors include: Claire B. Paris, Igal Berenshtein, Marcia L. Trillo, Robin Faillettaz, and Maria J. Olascoaga of the UM Rosenstiel School of Marine and Atmosheric Science; Zachary M. Aman of the University of Western Australia’s School of Mechanical and Chemical Engineering; Michael Schlüter of Hamburg University of Technology, Institute of Multiphase Flows; and Samantha B. Joye of the University of Georgia’s Department of Marine Sciences.

The study was supported by a grant from the Gulf of Mexico Research Initiative (GOMRI) Center for Integrated Modeling and Analysis of Gulf Ecosystems (C-IMAGE) II and the Ecosystem Impacts of Oil and Gas Input to the Gulf (ECOGIG). Data are publicly available through the Gulf of Mexico Research Initiative Information and Data Cooperative (GRIIDC) at https://data.gulfresearchinitiative.org.