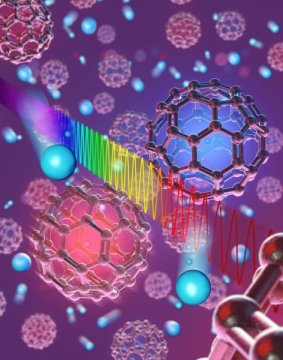 JILA researchers have measured hundreds of individual quantum energy levels in the buckyball, a spherical cage of 60 carbon atoms. It’s the largest molecule that has ever been analyzed at this level of experimental detail in the history of quantum mechanics. Fully understanding and controlling this molecule’s quantum details could lead to new scientific fields and applications, such as an entire quantum computer contained in a single buckyball.

The buckyball, formally known as buckminsterfullerene, is extremely complex. Due to its enormous 60-atom size, the overall molecule has a staggeringly high number of ways to vibrate — at least 100,000,000,000,000,000,000,000,000 vibrational quantum states when the molecule is warm. That’s in addition to the many different energy states for the buckyball’s rotation and other properties.

As described in the January 4 issue of Science, the JILA team used an updated version of their frequency comb spectroscopy and cryogenic buffer gas cooling system to observe isolated, individual energy transitions among rotational and vibrational states in cold, gaseous buckyballs. This is the first time anyone has been able to prepare buckyballs in this form to analyze its rotations and vibrations at the quantum level.

JILA is jointly operated by the National Institute of Standards and Technology (NIST) and the University of Colorado Boulder.

Buckyballs, first discovered in 1984, have created great scientific excitement. But high-resolution spectroscopy, which can reveal the details of the molecule’s rotational and vibrational properties, didn’t work at ordinary room temperatures because the signals were too congested, NIST/JILA Fellow Jun Ye said. Low temperatures (about -138 degrees Celsius, which is -216 degrees Fahrenheit) enabled researchers to concentrate the molecules into a single rotational-vibrational quantum state at the lowest energy level and probe them with high-resolution spectroscopy.

The buckyball is the most symmetric molecule known, with a soccer-ball-like shape known as a modified icosahedron. It is small enough to be fully understood with basic quantum mechanics principles. Yet it is large enough to reveal insights into the extreme quantum complexity that emerges in huge systems.

As an example of practical applications, buckyballs could act as a pristine network of 60 atoms. The core of each atom possesses an identical property known as “nuclear spin,” which enables it to interact magnetically with its environment. Therefore, each spin could act as a magnetically controlled quantum bit or “qubit” in a quantum computer.

“If we had a buckyball made of pure isotopic carbon-13, each atom would have a nuclear spin of 1/2, and each buckyball could serve as a 60-qubit quantum computer,” Ye said. “Of course, we don’t have such capabilities yet; we would need to first capture these buckyballs in traps.”

A key part of the new quantum revolution, a quantum computer using qubits made of atoms or other materials could potentially solve important problems that are intractable using today’s machines. NIST has a major stake in quantum science.

“There are also a lot of astrophysics connections,” Ye continued. “There are abundant buckyball signals coming from remote carbon stars,” so the new data will enable scientists to better understand the universe.

After they measured the quantum energy levels, the JILA researchers collected statistics on buckyballs’ nuclear spin values. They confirmed that all 60 atoms were indistinguishable, or virtually identical. Precise measurements of the buckyball’s transition energies between individual quantum states revealed its atoms interacted strongly with one another, providing insights into the complexities of its molecular structure and the forces between atoms.

For the experiments, an oven converted a solid sample of material into gaseous buckyballs. These hot molecules flowed into a cell (container) anchored to a cryogenic cold apparatus, such that the molecules were cooled by collisions with cold argon gas atoms. Then laser light at precise frequencies was aimed at the cold gas molecules, and researchers measured how much light was absorbed. The observed structure in the infrared spectrum encoded details of the quantum-mechanical energy-level structure.

The laser light was produced by an optical frequency comb, or “ruler of light,” and aimed into an optical cavity surrounding the cold cell to enhance the absorption signals. The comb contained about 1000 “teeth” at optical frequencies spanning the full band of buckyball vibrations. The comb light was generated from a single fiber laser.