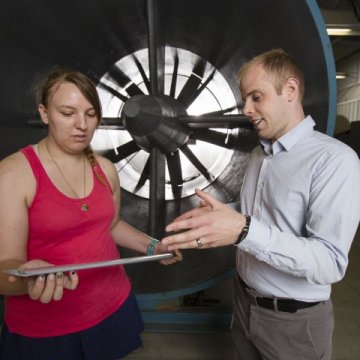 Although hybrid-electric cars are becoming commonplace, similar technology applied to airplanes comes with significantly different challenges. University of Illinois aerospace engineers are addressing some of them toward the development of a more sustainable alternative to fossil fuels to power airplanes.

“Jet fuel and aviation gasoline are easy to store on an airplane. They are compact and lightweight when compared to the amount of energy they provide. Unfortunately, the actual combustion process is very inefficient. We’re harnessing only a small fraction of that energy but we currently don’t have electrical storage systems that can compete with that,” said Phillip Ansell, assistant professor in the Department of Aerospace Engineering in the College of Engineering at the University of Illinois.

Ansell said adding more batteries to fly farther may seem logical, but it works against the goal to make an aircraft as lightweight as possible. “That’s one of the big barriers we run into when designing battery-powered electrified aircraft. The current technology has very significant range disadvantages. But strong fuel-burn advantages.”

He, along with former aerospace undergraduate student, Tyler Dean, and current doctoral student Gabrielle Wroblewski, utilized a series of simulations to model the performance of hybrid-electric aircraft.

“We started with an existing twin-engine aircraft and looked at how we might create a hybrid-electric drivetrain for it using existing off-the-shelf hardware,” Ansell said. “We wanted to know how well it would perform. If I used a certain set of drivetrain components, I want to know how far the aircraft could fly, how much fuel does it burn, how fast can if climb — all of the overall flight performance changes.”

A flight-performance simulator was created to accurately represent the true flight performance of a Tecnam P2006T on a general mission to include take off, climb, cruise, descent, and landing, along with sufficient reserves to meet FAA regulations. Transition segments were incorporated into the simulation during climb and descent where the throttle setting, flap deployment, propeller rotation rate, and all other flight control variables were either set to mimic input from a typical pilot or prescribed in accordance with the aircraft flight manual.

After configuring the simulator to collect baseline performance data, a parallel hybrid drivetrain was integrated into the simulation. The researchers compared the sensitivity of range and fuel economy to the level of electrification, battery specific energy density, and electric motor power density. The same sensitivities were studied with a series hybrid-electric drivetrain.

Ansell said that, overall, a hybrid-electric drivetrain can lead to substantial improvements in fuel efficiency of a given aircraft configuration, though these gains depend strongly on the coupled variations in the degree of drivetrain electrification and the required mission range. Both of these factors influence the weight allocation of battery and fuel systems, as well as the weight scaling imposed by internal combustion engine and electrical motor components. In general, to obtain the greatest fuel efficiency a hybrid architecture should be used with as much electrification in the drivetrain as is permissible within a given range requirement.

The fuel efficiency improvements were shown to particularly shine for short-range missions, which is a good thing since range limitations serve as one of the key bottlenecks in hybrid aircraft feasibility. Though, through this study the changes in the range capabilities of the aircraft were also able to be forecast with advancements in hybrid component technologies. “For example,” Ansell said, “the propulsion system today could be configured to have 25 percent of its propulsive power come from an electric motor. However, it would only be able to fly about 80 nautical miles. Fast forward to projections for lighter battery technologies for roughly the year 2030 and the same aircraft could fly two and a half to three times as far. The range increase is nonlinear, so the largest improvements can be seen for the most immediate improvements with battery specific energy density, with gradually diminishing returns for that same proportional increase in specific energy.”

“One interesting and unexpected result we observed, however, came about when comparing the parallel and series hybrid architectures. Since the parallel architecture mechanically couples the shaft power of the engine and motor together, only one electrical machine is needed. For the series architecture, a generator is also needed to convert the engine power to electrical power, along with a larger motor than the parallel hybrid configuration to drive the propulsor. Unexpectedly, this aspect made the parallel architecture more beneficial for improved range and fuel burn almost across the board due to its lighter weight. However, we did observe that if significant improvements are made in maturing electrical motor components in the very long term, we may actually someday see better efficiency out of series-hybrid architectures, as they permit a greater flexibility in the placement and distribution of propulsors.”

The team chose to model the Tecnam P2006T using a series of performance variables found in published articles by the aircraft manufacturer. They selected that particular aircraft, in part, because NASA has been working on their X-57 aircraft, which has leading-edge propellers for high lift. “This study was being conducted for NASA, and use of this aircraft also allowed our results to be better applicable to the X-57 concept vehicle,” Ansell said. “Using our data, they will be able to have at least a ballpark idea about how the hybrid system will perform without the other distributed propulsion modifications.”

Ansell said propulsion electrification is still very much an unknown in terms of how a vehicle should be built, engineered, flown. “Our study helps inform those discussions. We looked only at battery storage systems though there are many more that can be implemented, each with their own advantages and disadvantages. This study allowed us to look at what types of advancements need to be made in motor technology, in battery technology, etc.”

The study, “Mission Analysis and Component-Level Sensitivity Study of Hybrid-Electric General Aviation Propulsion Systems,” was conducted by Tyler Dean, Gabrielle Wroblewski, and Phillip Ansell. It appears in the Journal of Aircraft.