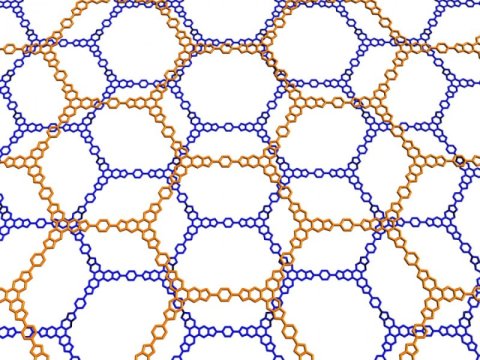 Building at the nanoscale is not like building a house. Scientists often start with two-dimensional molecular layers and combine them to form complex three-dimensional architectures. And instead of nails and screws, these structures are joined together by the attractive van der Waals forces that exist between objects at the nanoscale.

Van der Waals forces are critical in constructing materials for energy storage, biochemical sensors and electronics, although they are weak when compared to chemical bonds. They also play a crucial role in drug delivery systems, determining which drugs bind to the active sites in proteins.

In new research that could help inform development of new materials, Cornell chemists have found that the empty space (“pores”) present in two-dimensional molecular building blocks fundamentally changes the strength of these van der Waals forces, and can potentially alter the assembly of sophisticated nanostructures.

The findings represent an unexplored avenue toward governing the self-assembly of complex nanostructures from porous two-dimensional building blocks. “We hope that a more complete understanding of these forces will aid in the discovery and development of novel materials with diverse functionalities, targeted properties, and potentially novel applications,” said Robert A. DiStasio Jr., assistant professor of chemistry in the College of Arts and Sciences.

In three prototypical model systems, the researchers found that particular pore sizes lead to unexpected behavior in the physical laws that govern van der Waals forces. Further, they write, this behavior “can be tuned by varying the relative size and shape of these void spaces … [providing] new insight into the self-assembly and design of complex nanostructures.”

The researchers demonstrated their findings with numerous two-dimensional systems, including covalent organic frameworks, which are endowed with adjustable and potentially very large pores.

“I am surprised that the complicated relationship between void space and van der Waals forces could be rationalized through such simple models,” said Yang. “In the same breath, I am really excited about our findings, as even small changes in the van der Waals forces can markedly impact the properties of molecules and materials.”

The work received funding from the Cornell Center for Materials Research and the National Science Foundation, and computational resources from the National Energy Research Scientific Computing Center through the U.S. Department of Energy.