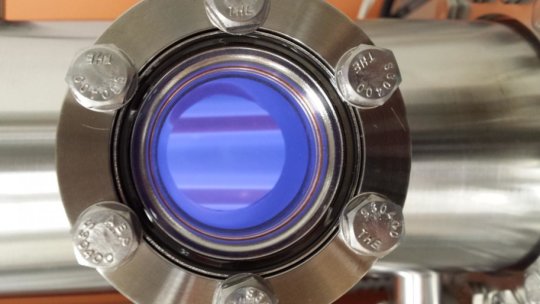 In their search for life in solar systems near and far, researchers have often accepted the presence of oxygen in a planet’s atmosphere as the surest sign that life may be present there. A new Johns Hopkins study, however, recommends a reconsideration of that rule of thumb.

Simulating in the lab the atmospheres of planets beyond the solar system, researchers successfully created both organic compounds and oxygen, absent of life.

The findings, published Dec. 11 by the journal ACS Earth and Space Chemistry, serve as a cautionary tale for researchers who suggest the presence of oxygen and organics on distant worlds is evidence of life there.

“Our experiments produced oxygen and organic molecules that could serve as the building blocks of life in the lab, proving that the presence of both doesn’t definitively indicate life,” says Chao He, assistant research scientist in the Johns Hopkins University Department of Earth and Planetary Sciences and the study’s first author. “Researchers need to more carefully consider how these molecules are produced.”

Oxygen makes up 20 percent of Earth’s atmosphere and is considered one of the most robust biosignature gases in Earth’s atmosphere. In the search for life beyond Earth’s solar system, however, little is known about how different energy sources initiate chemical reactions and how those reactions can create biosignatures like oxygen. While other researchers have run photochemical models on computers to predict what exoplanet atmospheres might be able to create, no such simulations to He’s knowledge have before now been conducted in the lab.

The research team performed the simulation experiments in a specially designed Planetary HAZE (PHAZER) chamber in the lab of Sarah Hörst, assistant professor of Earth and planetary sciences and the paper’s co-author. The researchers tested nine different gas mixtures, consistent with predictions for super-Earth and mini-Neptune type exoplanet atmospheres; such exoplanets are the most abundant type of planet in our Milky Way galaxy. Each mixture had a specific composition of gases such as carbon dioxide, water, ammonia, and methane, and each was heated at temperatures ranging from about 80 to 700 degrees Fahrenheit.

He and the team allowed each gas mixture to flow into the PHAZER setup and then exposed the mixture to one of two types of energy, meant to mimic energy that triggers chemical reactions in planetary atmospheres: plasma from an alternating current glow discharge or light from an ultraviolet lamp. Plasma, an energy source stronger than UV light, can simulate electrical activities like lightning and/or energetic particles, and UV light is the main driver of chemical reactions in planetary atmospheres such as those on Earth, Saturn and Pluto.

After running the experiments continuously for three days, corresponding to the amount of time gas would be exposed to energy sources in space, the researchers measured and identified resulting gasses with a mass spectrometer, an instrument that sorts chemical substances by their mass to charge ratio.

The research team found multiple scenarios that produced both oxygen and organic molecules that could build sugars and amino acids — raw materials for which life could begin — such as formaldehyde and hydrogen cyanide.

“People used to suggest that oxygen and organics being present together indicates life, but we produced them abiotically in multiple simulations,” He says. “This suggests that even the co-presence of commonly accepted biosignatures could be a false positive for life.”

This study was funded by the NASA Exoplanets Research Program Grant NNX16AB45G. Chao He received funding from the Morton K. and Jane Blaustein Foundation.

Materials provided by Johns Hopkins University. Note: Content may be edited for style and length.