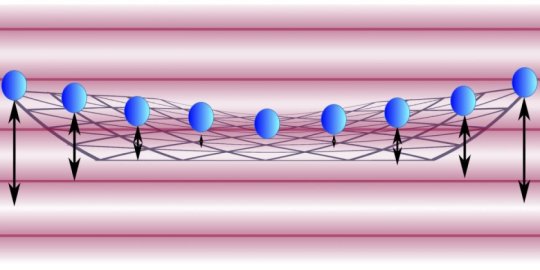 Physicists at the National Institute of Standards and Technology (NIST) have “flash-frozen” a flat crystal of 150 beryllium ions (electrically charged atoms), opening new possibilities for simulating magnetism at the quantum scale and sensing signals from mysterious dark matter.

Many researchers have tried for decades to chill vibrating objects that are large enough to be visible to the naked eye to the point where they have the minimum motion allowed by quantum mechanics, the theory that governs the behavior of matter at the atomic scale. The colder the better, because it makes the device more sensitive, more stable and less distorted, and therefore, more useful for practical applications. Until now, however, researchers have only been able to reduce a few types of vibrations.

In the NIST experiment, magnetic and electric fields cooled and trapped the ions so that they formed a disc less than 250 micrometers (millionths of a meter) in diameter. The disc is considered a crystal because the ions are arranged in a regularly repeating pattern.

As described in Physical Review Letters, NIST researchers chilled the crystal in just 200 microseconds (millionths of a second) so that each ion had about one-third of the energy carried by a single phonon, a packet of motional energy in the crystal. This is very close to the amount of energy in the lowest-possible quantum “ground” state for the crystal’s so-called “drumhead” vibrations, which are similar to the up-and-down motions of a beating drum.

The researchers cooled and slowed all 150 drumhead vibrations, one for each ion. The work showed that hundreds of ions can be collectively calmed using this technique, a significant advance over the previous demonstration by another group cooling a line of 18 ions.

For vibrations at the frequencies cooled in this demonstration, one-third of the energy carried by a phonon corresponds to 50 microKelvin, or 50 millionths of a degree above absolute zero (minus 459.67 °F or minus 273.15 °C), group leader John Bollinger said. While not a record-breaking temperature, this level is close to the quantum-mechanical ground state for all of the drumhead modes, meaning the thermal motion is small for such a highly confined system, Bollinger noted.

To achieve so much cooling, the researchers aimed two lasers with specific frequencies and power levels at the crystal. The lasers coupled the energy levels of the ions in such a way to induce the ion crystal to lose energy without adding to its motion. For most laser light particles scattered by the crystal, the ions lost motion, cooling the crystal.

The method didn’t cool other types of vibrations such as side-to-side motion of the disc-shaped crystal. But the drumhead motions have the most practical uses. Only the drumhead vibrations are used in quantum simulations and quantum sensors.

“A quantum sensing application that we are excited about investigating is the sensing of very weak electric fields,” Bollinger said. “With ground state cooling we improve our ability to sense electric fields at a level that enables a search for certain types of dark matter — axions (hypothetical subatomic particles) and hidden photons (as-yet-unseen force carriers).”

Future research will attempt cooling of three-dimensional crystals with much larger numbers of ions.