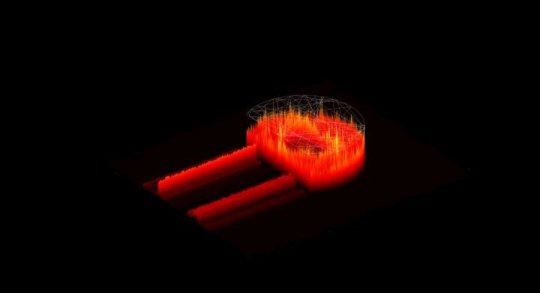 To tame chaos in powerful semiconductor lasers, which causes instabilities, scientists have introduced another kind of chaos.

High-powered semiconductor lasers are used in materials processing, biomedical imaging and industrial research, but the emitted light they produce is affected by instabilities, making it incoherent.

The instabilities in the laser are caused by optical filaments; light structures that move randomly and change with time, causing chaos. Removing these instabilities has long been a goal in physics, but previous strategies to reduce filaments have usually involved reducing the power of the laser.

This means it can no longer be used for many practical high-power applications, such as in ultrabright 3D laser cinema or as elements in extremely bright laser systems used in fusion reactors.

Instead, researchers had to choose between a powerful semiconductor laser with poor output quality and a coherent but much less powerful laser.

Now, a research team from Imperial College London, Yale University, Nanyang Technological University and Cardiff University have come up with a new solution.

Their technique, published today in Science, uses ‘quantum chaos’ to prevent the laser filaments, which lead to the instabilities, from forming in the first place. By creating quantum (wave) chaos in the cavity used to create the laser, the laser itself remains steady.

Professor Ortwin Hess, from the Department of Physics at Imperial, contributed much of the theory, simulation and interpretation of the new system. He said: “The way the optical filaments, which cause the laser instabilities, grow and resist control is for the laser a bit like the unruly behaviour of tornadoes. Once they form, they move about chaotically, causing destruction in their wake.

“However, tornadoes are more likely to form and move about over flat country. For example, in America they form frequently in beautiful Oklahoma but not as often in hilly West Virginia. The hills appear to be a key difference — they prevent tornadoes from being able to form or move around.

“In the same way, by creating a ‘hilly’ optical landscape right inside our lasers using quantum chaos, we don’t allow the filaments — our optical tornados — to form or grow out of control.”

The laser system, manufactured at the Nanyang Technological University in Singapore, has been proven experimentally at Yale University. The team are now working to further explore and tailor the light emission, such as improving the directionality of the laser.

They say however that the breakthrough should already allow semiconductor lasers to work at higher power with high emission quality, and that the same idea could be applied to other types of lasers.

Lasers emit coherent light that can be focused in a tight beam. To produce and amplify the light, it is bounced around a cavity through special gain materials. However, when large semiconductor lasers are switched on, this bouncing back and forth creates filaments — sections of the light that swiftly begin to act chaotically.

To create a different kind of chaos — the quantum chaotic landscape — the team designed a new shape of cavity for the laser. Most cavities are cuboid in shape, but by using a D-shaped cavity, the team were able to induce quantum chaos in the light bouncing around.

This quantum chaos acts on a smaller scale than the wavelength of the light, creating the optical ‘hills’ that help to dispel the optical ‘tornadoes’.

Professor Hui Cao, from Yale University, said: “We use wave-chaotic or disordered cavities to disrupt the formation of self-organized structures such as filaments that lead to instabilities.”

The team gained insight into the processes and cavity shapes likely to create this kind of quantum chaos from theories and experiments in nanophotonics and nanoplasmonics — studying light and metals at scales of billionths of a metre.

Professor Hess added: “I have been working on spatio-temporal and quantum dynamics in lasers since my PhD, so it is gratifying to return to it now with the knowledge gained from nanophotonics and nanoplasmonics.

“The relationship also works the other way around — with systems like this we can offer new insights into nanophotonics and nanoplasmonics, and bring the nanoscience and laser communities together.”