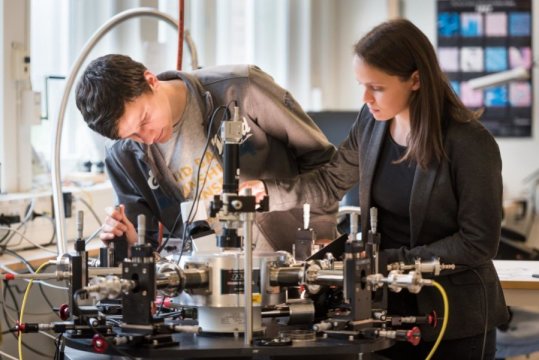 Only now in 2018 have researchers successfully demonstrated that hypothetical ‘particles’ that were proposed by Franz Preisach in 1935 actually exist. In an article published in Nature Communications, scientists from the universities in Linköping and Eindhoven show why ferroelectric materials act as they do.

Ferroelectricity is the lesser-known twin of ferromagnetism. Iron, cobalt and nickel are examples of common ferromagnetic materials. The electrons in such materials function as small magnets, dipoles, with a north pole and a south pole. In a ferroelectric, the dipoles are not magnetic but electric and have a positive and negative pole.

In absence of an applied magnetic (for a ferromagnet) or electric (for a ferroelectric) field, the orientation of the dipoles is random. When a sufficiently strong field is applied, the dipoles align with it. This field is known as the critical (or coercive) field. Surprisingly, in a ‘ferroic’ material the alignment remains when the field is removed: the material is permanently polarized. To change the direction of the polarization, a field at least as strong as the critical field must be applied in the opposite direction. This effect is known as hysteresis: the behaviour of the material depends on what has previously happened to it. The hysteresis makes these materials highly suitable as rewritable memory, in for example hard disks.

A model for ferroelectricity and ferromagnetism was developed by the German researcher Franz Preisach as early as 1935. The purely mathematical Preisach model describes ferroic materials as a large collection of small independent modules called hysterons. Each hysteron shows ideal ferroic behaviour, but has its own critical field that can differ from hysteron to hysteron. It has been generally agreed that the model gives an accurate description of real materials, but scientists have not understood the physics on which the model is built: what are the hysterons? Why do their critical fields differ as they do? In other words, why do ferroelectric materials act as they do?

Professor Martijn Kemerink’s research group (Complex Materials and Devices at LiU), in collaboration with researchers at the University of Eindhoven, has now studied two organic ferroelectric model systems and found the explanation.

The molecules in the studied organic ferroelectric materials like to lie on top of each other, forming cylindrical stacks of around a nanometre wide and several nanometres long.

“We could prove that these stacks actually are the sought-after hysterons. The trick is that they have different sizes and strongly interact with each other since they are so closely packed. Apart from its own unique size, each stack therefore ´feels a different environment of other stacks, which explains the Preisach distribution,” says Martijn Kemerink.

The researchers have shown that the non-ideal switching of a ferroelectric material depends on its nanostructure — in particular, how many stacks interact with each other, and the details of the way in which they do this.

“We had to develop new methods to measure the switching of individual hysterons to test our ideas. Now that we have shown how the molecules interact with each other on the nanometre scale, we can predict the shape of the hysteresis curve. This also explains why the phenomenon acts as it does. We have shown how the hysteron distribution arises in two specific organic ferroelectric materials, but it’s quite likely that this is a general phenomenon. I am extremely proud of my doctoral students, Indre Urbanaviciute and Tim Cornelissen, who have managed to achieve this,” says Martijn Kemerink.

The results can guide the design of materials for new, so-called multi-bit memories, and are a further step along the pathway to the small and flexible memories of the future.