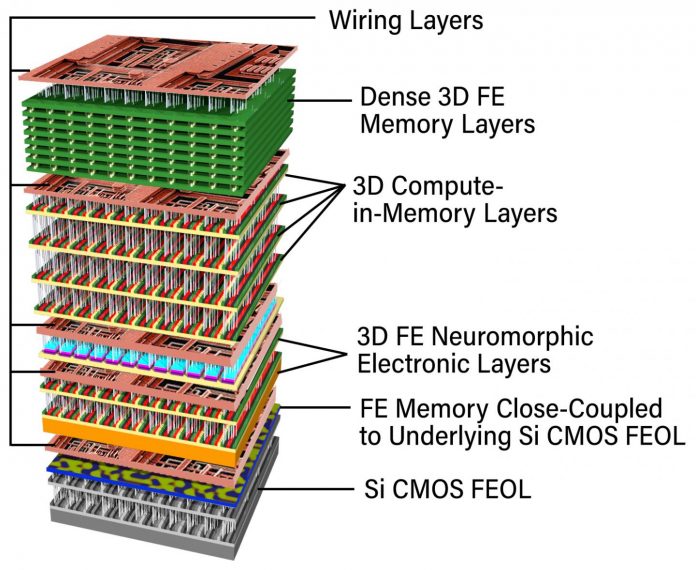 Penn State will receive more than $10 million from the U.S. Department of Energy as an Energy Frontier Research Center Award. This is one of 10 awards announced in 2020, and the second EFRC awarded to Penn State researchers.

This large center grant will focus on 3D ferroelectric microelectronics, according to principal investigator Susan Trolier-McKinstry, Evan Pugh University Professor and the Steward S. Flaschen Professor of Ceramic Science and Engineering, and Professor of Electrical Engineering.

“If you look at modern electronics, the memory is separate from the chip performing computation,” she said. “It is a time and energy bottleneck getting the data back and forth between the processor and the memory.”

The von Neumann bottleneck posits that the speed and efficiency of computation is limited by the time it takes to transfer data between chips, and in the meantime the much faster computational chip remains idle. The goal of this project is to prepare materials that will serve as memory to stack in the third dimension above the processor chip enabling seamless communication between memory and computation to mitigate this bottleneck.

The breakthrough technology, she says, is their ability to prepare the ferroelectric memory materials at very low temperatures. Previously, it was not possible to stack memory on the processor chip because the interconnects on the processor chip could not take temperatures higher than 400 degrees C. Without being able to lay the ferroelectric material down at a lower temperature, it is not possible to put memory on top of computational logic on the same chip.

The research in the center will focus on discovery of new ferroelectric materials, probing the origins of ferroelectricity, developing tools to control the functional properties, growing tailored ferroelectrics at low temperatures, integrating the new materials into a variety of memory devices, and developing processes that allow these materials to be stacked in 3D memory arrays.

The four-year grant begins Aug. 1 and is funded at between $10 million and $15 million with possibility of renewal. The other EFRC, the Center for Lignocellulose Structure and Formation, was renewed for an additional four years in 2018.