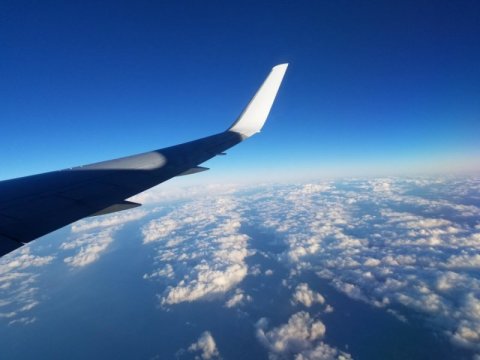 If you’ve ever taken a photo out the window of a commercial airplane, you most likely have a great shot of a winglet — that part of the wing at the tip that angles upward. That little change in the wingtip’s shape does a lot. It reduces drag, which can translate to higher speed or to allow a pilot to throttle back and save fuel. It also helps to reduce wingtip vortices that can be problematic for airplanes flying in their wake.

Although, winglets have been around since the mid-1970s, there is still a wide variety of shapes, sizes, and angles. Analyzing winglets to find the optimal characteristics to result in the lowest net drag for an aircraft was the goal of University of Illinois researchers Phillip Ansell, Kai James, and graduate student Prateek Ranjan.

“Many academic studies on non-planar wing designs idealize winglets installed with a sharp 90-degree turn at the tips, though there are a lot of things potentially wrong with having these sharp junctures. Because individual aircraft have a unique set of constraints and requirements, it’s difficult to make generalizations about how an aircraft should be designed,” said Ansell, assistant professor in the Department of Aerospace Engineering in the College of Engineering at the University of Illinois. “However, when looking at non-planar wing systems, we distilled the problem to something very specific and canonical. We used a method of multi-fidelity optimization, beginning with very simple mathematical algorithms to better understand the design space within plus or minus 10 percent accuracy, then ran more advanced simulations to understand how the winglet influences the flow field and performance of the wing.”

In their research, the team focused on a — non-linear wing design, known as Hyper Elliptic Cambered Span (HECS) wing configurations, where the vertical projection of the wing can be described mathematically using the equation of a hyper-ellipse.

“We distilled the wing geometry down to something very simple,” Ansell said. “We expressed the non-planarity of the wing — how curved it is, how high the wingtips are, etc. — using equations for a hyper-ellipse. Now we can easily change the values in the equation to find the best-performing wing while trading off sharper or smoother curvature as the tip is approached, as well as larger or smaller winglet heights.”

Ansell said the algorithm began with a fixed lift, a fixed projected span, a fixed bending moment of the wing, and a fixed weight, to generate a wing that has the minimum drag — and ultimately be more efficient.

“While others have studied non-planar wings with blended winglet designs, most have only looked at the so-called ‘inviscid’ aspect of the wing drag, ignoring the complex sources of drag introduced by the viscosity of the air,” Ansell said. “But that’s only about half of the picture. In our formulation, we included these viscous drag sources because it has a substantial influence on the net efficiency of the wing. For example, it is easy to reduce the inviscid drag of the wing by adding very tall winglets at the tips with very sharp junctures. However, there is a distinct viscous drag penalty by doing so that reduces the effectiveness of such a design in practice.”

“By performing a rigorous numerical optimization procedure, we were able to systematically explore the space of possible designs, and ultimately obtain designs that may seem unusual, and that we could never have predicted by relying on mere intuition,” said Kai James, also an assistant professor in the Department of Aerospace Engineering.

Ansell said this integrated optimization framework will assist the current state of low-speed wing design but may also result in an improvement over the current conventional wing designs, operating in the subsonic flight regime.