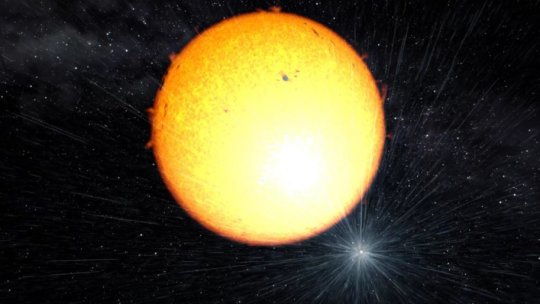 Neutron stars (often called pulsars) are stellar remnants that have reached the end of their evolutionary life: they result from the death of a star of between 10 and 30 Solar masses. Despite their small size (about 20 kilometres in diameter), neutron stars have more mass than the Sun, so they are extremely dense.

The study was led by Manuel Linares, Marie-Curie researcher of the Astronomy and Astrophysics Group (GAA), linked to the UPC’s Department of Physics, in collaboration with the astronomers Tariq Shahbaz and Jorge Casares of the IAC. The researchers used data obtained from the Gran Telescopio Canarias (GTC), the largest optical and infrared telescope in the world, the William Herschel Telescope (WHT), the Isaac Newton Telescope Group (ING) and the IAC-80 telescope, in combination with dynamical models of binary stars with irradiation. An article reporting on the results of the study, entitled “Peering into the dark side: magnesium lines establish a massive neutron star in PSR J2215+5135,” was published in The Astrophysical Journal.

The team developed a more accurate method than those used to date to measure the mass of neutron stars in compact binaries. PSR J2215+5135 is part of a binary system, in which two stars orbit around a common centre of mass: a “normal” star (like the Sun) “accompanies” the neutron star. The secondary or companion star is strongly irradiated by the neutron star.

This new method can also be applied to the rest of this growing population of neutron stars: over the last 10 years, the Fermi-LAT NASA gamma ray telescope has revealed dozens of pulsars similar to PSR J2215+5135. In principle, the method can also be used to measure the mass of black holes and white dwarfs (remnants of stars that die with more than 30 or fewer than 10 Solar masses, respectively) when they are found in similar binary systems in which irradiation is important.

Denser than an atomic nucleus

Being able to determine the maximum mass of a neutron star has very important consequences for many fields of astrophysics, as well as for nuclear physics. The interactions between nucleons (the neutrons and protons that make up the nucleus of an atom) at high densities are one of the great mysteries of physics today. Neutron stars are a natural laboratory for studying the densest and most exotic states of matter that can be imagined.

The results of the project also suggest that in order to support the weight of 2.3 Solar masses, the repulsion between particles in the nucleus of the neutron star must be sufficiently strong. This would indicate that we are unlikely to find free quarks or other exotic forms of matter in the centre of the neutron star.