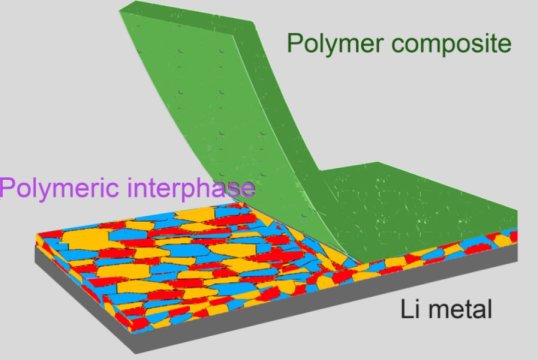 Rechargeable lithium metal batteries with increased energy density, performance, and safety may be possible with a newly-developed, solid-electrolyte interphase (SEI), according to Penn State researchers.

As the demand for higher-energy-density lithium metal batteries increases — for electric vehicles, smartphones, and drones — stability of the SEI has been a critical issue halting their advancement because a salt layer on the surface of the battery’s lithium electrode insulates it and conducts lithium ions.

“This layer is very important and is naturally formed by the reaction between the lithium and the electrolyte in the battery,” said Donghai Wang, professor of mechanical and chemical engineering. “But it doesn’t behave very well, which causes a lot of problems.”

One of the least-understood components of lithium metal batteries, the degradation of the SEI contributes to the development of dendrites, which are needle-like formations that grow from the lithium electrode of the battery and negatively affect performance and safety. The researchers published their approach to this problem today (Mar. 11) in Nature Materials.

“This is why lithium metal batteries don’t last longer — the interphase grows and it’s not stable,” Wang said. “In this project, we used a polymer composite to create a much better SEI.”

Led by chemistry doctoral student Yue Gao, the enhanced SEI is a reactive polymer composite consisting of polymeric lithium salt, lithium fluoride nanoparticles, and graphene oxide sheets. The novel construction of this battery component has thin layers of these materials, which is where Thomas E. Mallouk, Evan Pugh University Professor of Chemistry, lent his expertise.

“There is a lot of molecular-level control that is needed to achieve a stable lithium interface,” Mallouk said. “The polymer that Yue and Donghai designed reacts to make a claw-like bond to the lithium metal surface. It gives the lithium surface what it wants in a passive way so that it doesn’t react with the molecules in the electrolyte. The nanosheets in the composite act as a mechanical barrier to prevent dendrites from forming from the lithium metal.”

Using both chemistry and engineering design, the collaboration between fields enabled the technology to control the lithium surface at the atomic scale.

“When we engineer batteries, we don’t necessarily think like chemists, all the way down to the molecular level, but that’s what we needed to do here,” said Mallouk.

“With a more stable SEI, it’s possible to double the energy density of current batteries, while making them last longer and be safer,” Wang said.

The Office of Vehicle Technologies in the U.S. Department of Energy and the National Science Foundation supported this work.

Materials provided by Penn State. Original written by Erin Cassidy Hendrick. Note: Content may be edited for style and length.