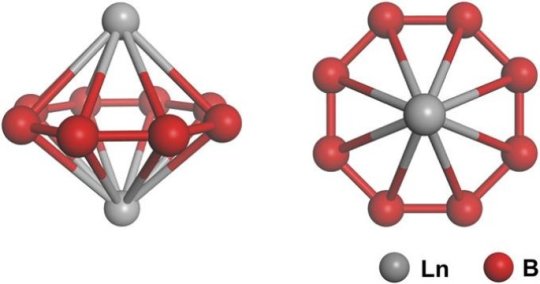 Brown University researchers and collaborators from Tsinghua University in China have shown that nanoclusters made from boron and lanthanide elements form highly stable and symmetric structures with interesting magnetic properties.

The findings, published in Proceedings of the National Academy of Sciences on Monday, July 9, suggest that these nanoclusters may be useful as molecular magnets or assembled into magnetic nanowires. The research also helps shed light on the structure and chemical bonding of bulk boron lanthanides, which may help in engineering new boride materials.

“Boron lanthanides are an important class of materials used in electronics and other applications, but nanoclusters of boron lanthanides have not been studied,” said Lai-Sheng Wang, a professor of chemistry at Brown and senior author of a paper describing the work. “We have just started to investigate these nanoclusters, and here we show that they can have an interesting ‘inverse sandwich’ structure with the right combination of boron and lanthanide atoms.”

The structure — a ring of bonded boron atoms with a single lanthanide atom bonded to each side — emerged in clusters made from eight boron atoms and two atoms of either lanthanum or praseodymium (both members of the lanthanide group on the periodic table). Sandwich structures — complexes in which two planar aromatic hydrocarbon molecules surround a single metal atom — are well known in chemistry and their discovery earned a Nobel Prize in 1973. Inverse sandwich structures are known to form in uranium-organic molecular complexes, Wang says, but this is the first time the structure has been seen in boron lanthanides.

Wang’s lab used a technique called photoelectron spectroscopy to study nanoclusters made of different chemical elements. The technique involves zapping atomic clusters with a high-powered laser. Each zap knocks an electron out of the cluster. By measuring the kinetic energy of those freed electrons, researchers can understand how the atoms in a cluster are bound together and infer the cluster’s physical structure. To find the structures, Wang compared the photoelectron spectra with theoretical calculations done by quantum chemist Professor Jun Li and his students from Tsinghua.

“We found that clusters made of eight boron and two lanthanide atoms are highly symmetric as inferred from their simple spectral patterns,” Wang said. “In chemistry, whenever we find something that’s highly symmetric it’s very exciting.”

That symmetry is produced, Wang said, by the nature of the chemical bonds that hold the structure together. The nature of those bonds also makes the clusters highly magnetic. That could make them useful for in nano-electronics applications or elsewhere.

“It gives us a new way of understanding the bonding and structure of boride materials,” he said. “By studying small units, we can gain insight into the bulk system, and I think we have gained some of that insight here.”