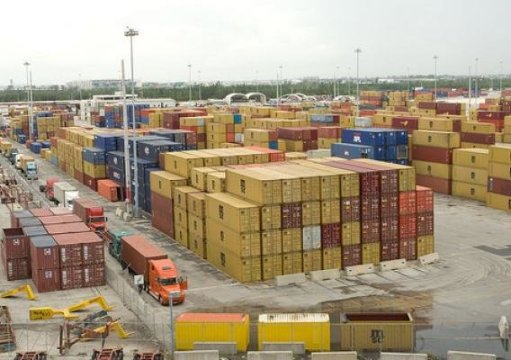 Physicists at the University of Maryland have developed a powerful new method to detect radioactive material. By using an infrared laser beam to induce a phenomenon known as an electron avalanche breakdown near the material, the new technique is able to detect shielded material from a distance. The method improves upon current technologies that require close proximity to the radioactive material.

With additional engineering advancements, the method could be scaled up and used to scan trucks and shipping containers at ports of entry, providing a powerful new tool to detect concealed, dangerous radioactive material. The researchers described their proof-of-concept experiments in a research paper published March 22, 2019 in the journal Science Advances.

“Traditional detection methods rely on a radioactive decay particle interacting directly with a detector. All of these methods decline in sensitivity with distance,” said Robert Schwartz, a physics graduate student at UMD and the lead author of the research paper. “The benefit of our method is that it is inherently a remote process. With further development, it could detect radioactive material inside a box from the length of a football field.”

“An electron avalanche can start with a single seed electron. Because the air near a radioactive source has some charged oxygen molecules — even outside a shielded container — it provides an opportunity to seed an avalanche by applying an intense laser field,” said Howard Milchberg, a professor of physics and electrical and computer engineering at UMD and senior author of the research paper, who also has an appointment at IREAP. “Electron avalanches were among the first demonstrations after the laser was invented. This is not a new phenomenon, but we are the first to use an infrared laser to seed an avalanche breakdown for radiation detection. The laser’s infrared wavelength is important, because it can easily and specifically detach electrons from oxygen ions.”

Applying an intense, infrared laser field causes the free electrons caught in the beam to oscillate and collide with atoms nearby. When these collisions become energetic enough, they can rip more electrons away from the atoms.

“A simple view of avalanche is that after one collision, you have two electrons. Then, this happens again and you have four. Then the whole thing cascades until you have full ionization, where all atoms in the system have at least one electron removed,” Milchberg explained.

As the air in the laser’s path begins to ionize, it has a measurable effect on the infrared light reflected, or backscattered, toward a detector. By tracking these changes, Schwartz, Milchberg and their colleagues were able to determine when the air began to ionize and how long it took to reach full ionization.

The timing of the ionization process, or the electron avalanche breakdown, gives the researchers an indication of how many seed electrons were available to begin the avalanche. This estimate, in turn, can indicate how much radioactive material is present in the target.

“Timing of ionization is one of the most sensitive ways to detect initial electron density,” said Daniel Woodbury, a physics graduate student at UMD and a co-author of the research paper. “We’re using a relatively weak probe laser pulse, but it’s ‘chirped,’ meaning that shorter wavelengths pass though the avalanching air first, then longer ones. By measuring the spectral components of the infrared light that passes through versus what is reflected, we can determine when ionization starts and reaches its endpoint.”

While the method remains a proof-of-concept exercise for now, the researchers envision further engineering developments that they hope will enable practical applications to enhance security at ports of entry across the globe.

“Right now we’re working with a lab-sized laser, but in 10 years or so, engineers may be able to fit a system like this inside a van,” Schwartz said. “Anywhere you can park a truck, you can deploy such a system. This would provide a very powerful tool to monitor activity at ports.”