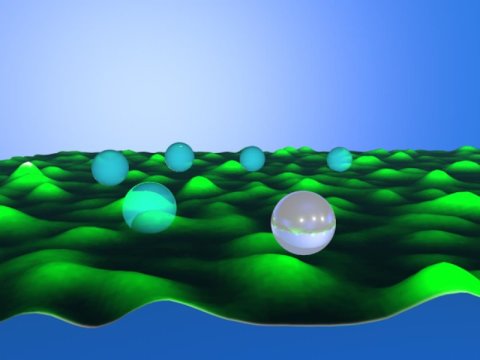 This year’s Nobel Prize in Physics, awarded for discoveries in laser physics, recognizes optical tweezers. Now researchers from the University of Gothenburg have developed a method that greatly simplifies and improves the use of optical tweezers.

“The idea came to me during a visit to the National Autonomous University of Mexico last year. It turned out that the lab there already had all the data needed to prove that this new method worked,” says Giovanni Volpe, a senior lecturer at the Department of Physics, University of Gothenburg.

Optical tweezers were discovered in the late 1980s. They can be described as light beam fingers that can take hold of particles, atoms, molecules and even bacteria and other living cells. The technique consists of an optical laser with the ability to hold onto a single cell, for example, without damaging it. This makes it possible to make very precise measurements.

With the new discovery currently being published in the scientific journal Nature Communications, the technique will now be considerably easier to use.

“We have managed to develop a method of measurement that is more accurate, but that uses 10 times less data and is 100 times faster than the methods currently available,” says Giovanni Volpe. “The method is completely automated and does not require any pre-set parameters to work.”

Can be used in the pharmaceutical industry

With this method, optical tweezers can now be moved out of the physics laboratory and be used in pharmaceutical research.

“Personally, what I find most exciting about the new method is the possibility of studying systems that are not in equilibrium, systems that are in flux,” says Volpe. “We will be able to measure phenomena we knew about before but have not been able to see.”

According to the researchers, optical tweezers can now be used in biological applications to measure extremely small forces. The method also makes it possible to analyse what are known as extended force fields.

Laura Perez Garcia, who is listed as the lead author in the Nature Communications article, has now joined the Department of Physics at the University of Gothenburg as a doctoral student.

“I am proud to announce this discovery. The results are due to good international cooperation, which has also led me to move to Gothenburg and become part of Giovanni Volpe’s research team,” says Perez Garcia.

The tool was invented by Arthur Ashkin and represents a realisation of his science fiction dream — to use the force field of light to move physical objects. When Arthur Ashkin successfully used laser light to push small particles towards the midpoint of the beam and keep them there, optical tweezers were born. A major breakthrough came in 1987, when Ashkin captured live bacteria with the tweezers without damaging them. He immediately began using the tweezers to study biological systems. Today optical tweezers are widely used within the research community.

Materials provided by University of Gothenburg. Note: Content may be edited for style and length.