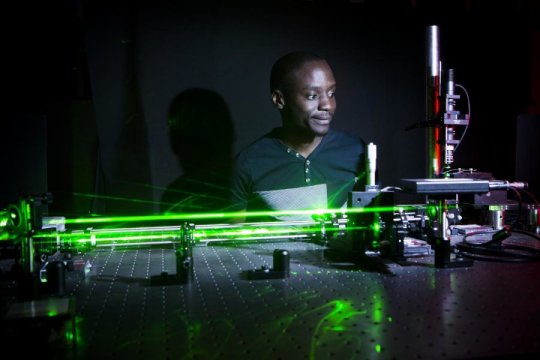 When you shine a beam of light on your hand, you don’t feel much, except for a little bit of heat generated by the beam. When you shine that same light into a world that is measured on the nano- or micro scale, the light becomes a powerful manipulating tool that you can use to move objects around — trapped securely in the light.

Researchers from the Structured Light group from the School of Physics at the University of the Witwatersrand in Johannesburg, South Africa, have found a way to use the full beam of a laser light, to control and manipulate minute objects such as single cells in a human body, tiny particles in small volume chemistry, or working on future on-chip devices.

While the specific technique, called holographic optical trapping and tweezing, is not new, the Wits Researchers found a way to optimally use the full force of the light — including vector light that was previously unavailable for this application. This forms the first vector holographic trap.

“Previously holographic traps were limited to particular classes of light (scalar light), so it is very exciting that we can reveal a holistic device that covers all classes of light, including replicating all previous trapping devices,” Professor Andrew Forbes, team leader of the collaboration and Distinguished Professor in the School of Physics where he heads up the Wits Structured Light Laboratory.

“What we have done is that we have demonstrated the first vector holographic optical trapping and tweezing system. The device allows micrometer sized particles, such as biological cells, to be captured and manipulated only with light.”

The final device could trap multiple particles at once and move them around just with vector states of light. The experiments for this study were performed by Nkosi Bhebhe as part of his doctoral studies. The work is published in Nature’s on-line journal, Scientific Reports.

In conventional optical trapping and tweezing systems, light is focused very tightly into a small volume that contains small particles, such as biological cells. At this small scale (typically micro- or nanometres) the forces that the light can exert are significant, so particles can be trapped by the light and then controlled. As the light is moved, the particles will move with it. This idea won American scientist Arthur Ashkin the 2018 Nobel prize in Physics. Originally the light was controlled mechanically with stages and mirrors, but the idea was later improved on by moving the light around holographically, that is, by using computer generated holograms to control the light without moving parts, thereby controlling the particles. Until now only special classes of laser beams, called scalar beams, could be used in such holographic traps.

In their paper titled: A vector holographic optical trap the Wits researchers showed how to create and control any pattern of light holographically, and then used this to form a new optical trapping and tweezing device.

“In particular the device could work with both the traditional laser beams (scalar beams) as well as more complex vector beams. Vector beams are highly topical and have found many applications, but no vector holographic trap was possible until now,” says Forbes.

The Wits researchers demonstrate their new trap by holographically controlling both scalar and vector beams in the same device, advancing the state-of-the-art and introducing a new device to the community. The group expects the new device to be useful in controlled experiments in the micro- and nano-worlds, including single cell studies in biology and medicine, small volume chemical reactions, fundamental physics and for future on-chip devices.

Having previously shown that it is possible to create hundreds of custom light patterns from one hologram, the research brings together their prior work on holographic control of light with the application of optical trapping and tweezing.

How a holographic optical trap works

In a conventional optical trap, light is focused very tightly so that it can exert forces on matter. The matter, say a small particle, gets trapped in the light. When the light is moved by mirrors or mechanical stages, so the particle moves with it. This is referred to as optical trapping (capturing the particle) and optical tweezing, moving the particle as if with tweezers, but in this case tweezers made of light. To make the control less mechanical, researchers used holograms to control the light. With spatial light modulators one could encode structured light patterns and move those patterns around inside the trap, so that many particles could be trapped and moved simultaneously. This opened many new exciting fields, but the final holographic optical traps (HOTs) were limited to only scalar beams of light, a tiny fraction of what was possible. The other class of optical beams, vector states, were considered not possible to control holographically. With the new vector HOT, all states of light can now be used. Time will time what this means for the community at large.