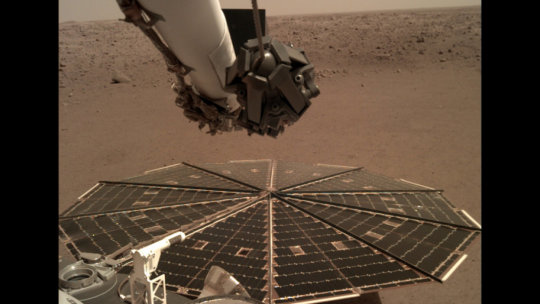 NASA’s Interior Exploration using Seismic Investigations, Geodesy and Heat Transport InSight lander, which touched down on Mars just 10 days ago, has provided the first ever “sounds” of Martian winds on the Red Planet.

InSight sensors captured a haunting low rumble caused by vibrations from the wind, estimated to be blowing between 10 to 15 mph (5 to 7 meters a second) on Dec. 1, from northwest to southeast. The winds were consistent with the direction of dust devil streaks in the landing area, which were observed from orbit.

“Capturing this audio was an unplanned treat,” said Bruce Banerdt, InSight principal investigator at NASA’s Jet Propulsion Laboratory (JPL) in Pasadena, California. “But one of the things our mission is dedicated to is measuring motion on Mars, and naturally that includes motion caused by sound waves.”

Teleconference audio and accompanying visuals will stream live on NASA’s website (www.nasa.gov/live). A follow-along page is available at:

Two very sensitive sensors on the spacecraft detected these wind vibrations: an air pressure sensor inside the lander and a seismometer sitting on the lander’s deck, awaiting deployment by InSight’s robotic arm. The two instruments recorded the wind noise in different ways. The air pressure sensor, part of the Auxiliary Payload Sensor Subsystem (APSS), which will collect meteorological data, recorded these air vibrations directly. The seismometer recorded lander vibrations caused by the wind moving over the spacecraft’s solar panels, which are each 7 feet (2.2 meters) in diameter and stick out from the sides of the lander like a giant pair of ears.

This is the only phase of the mission during which the seismometer, called the Seismic Experiment for Interior Structure SEIS, will be capable of detecting vibrations generated directly by the lander. In a few weeks, it will be placed on the Martian surface by InSight’s robotic arm, then covered by a domed shield to protect it from wind and temperature changes. It still will detect the lander’s movement, though channeled through the Martian surface. For now, it’s recording vibrational data that scientists later will be able to use to cancel out noise from the lander when SEIS is on the surface, allowing them to detect better actual marsquakes.

When earthquakes occur on Earth, their vibrations, which bounce around inside our planet, make it “ring” similar to how a bell creates sound. InSight will see if tremors, or marsquakes, have a similar effect on Mars. SEIS will detect these vibrations that will tell us about the Red Planet’s deep interior. Scientists hope this will lead to new information on the formation of the planets in our solar system, perhaps even of our own planet.

SEIS, France’s Centre National d’Études Spatiales (CNES), includes two sets of seismometers. Those contributed by the French will be used once SEIS is deployed from the deck of the lander. But SEIS also includes short period (SP) silicon sensors developed by Imperial College London with electronics from Oxford University in the United Kingdom. These sensors can work while on the deck of the lander and are capable of detecting vibrations up to frequencies of nearly 50 hertz, at the lower range of human hearing.

“The InSight lander acts like a giant ear,” said Tom Pike, InSight science team member and sensor designer at Imperial College London. “The solar panels on the lander’s sides respond to pressure fluctuations of the wind. It’s like InSight is cupping its ears and hearing the Mars wind beating on it. When we looked at the direction of the lander vibrations coming from the solar panels, it matches the expected wind direction at our landing site.”

Pike compared the effect to a flag in the wind. As a flag breaks up the wind, it creates oscillations in air pressure that the human ear perceives as flapping. Separately, APSS records changes in pressure directly from the thin Martian air.

“That’s literally what sound is — changes in air pressure,” said Don Banfield InSight’s science lead for APSS from Cornell University in Ithaca, New York. “You hear that whenever you speak to someone across the room.”

Unlike the vibrations recorded by the short period sensors, audio from APSS is about 10 hertz, below the range of human hearing.

The raw audio sample from the seismometer was released unaltered; a second version was raised two octaves to be more perceptible to the human ear — especially when heard through laptop or mobile speakers. The second audio sample from APSS was sped up by a factor of 100, which shifted it up in frequency.

An even clearer sound from Mars is yet to come. In just a couple years, NASA’s Mars 2020 rover is scheduled to land with two microphones on board. The first, provided by JPL, is included specifically to record, for the first time, the sound of a Mars landing. The second is part of the SuperCam and will be able to detect the sound of the instrument’s laser as it zaps different materials. This will help identify these materials based on the change in sound frequency.

JPL manages InSight for NASA’s Science Mission Directorate in Washington. InSight is part of NASA’s Discovery Program, which is managed by NASA’s Marshall Space Flight Center in Huntsville, Alabama. Lockheed Martin Space in Denver built the InSight spacecraft, including its cruise stage and lander, and supports spacecraft operations for the mission.

A number of European partners, including CNES and the German Aerospace Center, support the InSight mission. CNES and the Institut de Physique du Globe de Paris provided SEIS, with significant contributions from the Max Planck Institute for Solar System Research in Germany, the Swiss Institute of Technology in Switzerland, Imperial College and Oxford University in the United Kingdom, and JPL. DLR provided the Heat Flow and Physical Properties Package HP3 instrument, with significant contributions from the Space Research Center of the Polish Academy of Sciences and Astronika in Poland. Spain’s Centro de Astrobiología supplied the wind sensors.