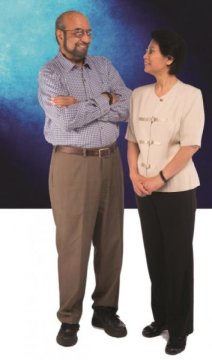 It can’t be seen with a human eye. It doesn’t look anything like C-3PO or R2-D2, or even BB-8. But, nevertheless, it is a robot (all 120nm of it) and its creators from The University of Texas at San Antonio (UTSA) are now world record holders in the Guinness World Records for creating the Smallest Medical Robot.

The series of nanorobots was created by Soutik Betal during his doctoral research in Electrical Engineering under the guidance of professors Ruyan Guo and Amar S. Bhalla in the UTSA Department of Electrical and Computer Engineering, and they could one day lead to huge medical advancements.

Guo explains, “In a nutshell, we have developed nanocomposite particles that can be remotely controlled by an electromagnetic field. They function like extremely tiny robots that interact with biological cells.”

The nanocomposites are made of two different types of multifunctional oxide materials in a “core and shell” configuration. The core is magnetic. It changes ‘shape’ in response to magnetic fields. The shell is ferroelectric. It converts pressure into electric potentials.

The magneto-elasto-electric coupled effect in the nanocomposites act as arms and legs that move the nanoparticle around to interact with targeted biological cells. The nanorobots can move cells to align with one another, push cells into different locations and possibly be used to deliver medication into a cell.

The experimental demonstration of UTSA’s remotely controlled medical robot was performed in late 2016 by Betal, who was conducting his doctoral dissertation research in Guo and Bhalla’s Multifunctional Electronics Materials and Devices Research Laboratory (MeMDRL). While the fabrication of core-shell structured materials have been developed through international research exchanges with collaborators in Brazil, the team discovered and Betal demonstrated the nanocomposites produced permeable motion.

“We were intrigued and initially puzzled at the fact that nanoparticles larger than the opening of a cell membrane’s channels could actually enter inside,” said Guo.

The nanocomposite research also benefited from the MeMDRL’s interdisciplinary research collaboration with faculty in the UTSA Departments of Biomedical Engineering and Physics and Astronomy. The research was supported in part by the National Science Foundation (Grant no. NSF 1002380), by the U.S. Department of Defense (Grant no. W911NF-12-1-0082) and by the UTSA Office of the Vice President for Research, Economic Development and Knowledge Enterprise.

Recognition for the work began when a study was published early this year in Nature — Scientific Reports. The Guinness Book of World Records designation followed the article publication.

The greatest rewards, however, may yet be ahead for the tiny robots.

“Their abilities leave room for much hope,” Guo said. “We believe cancerous cells may be specifically targeted for treatment eliminating the need for some chemotherapy treatments, and Alzheimer’s disease victims could possibly receive special treatments by aligning cells which have ceased to live in the brain. There is still much work to be done, but we are very happy for this recognition and the potential that lies ahead.”

Materials provided by University of Texas at San Antonio. Note: Content may be edited for style and length.