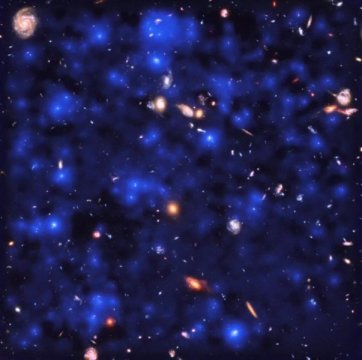 An unexpected abundance of Lyman-alpha emission in the Hubble Ultra Deep Field (HUDF) region was discovered by an international team of astronomers using the MUSE instrument on ESO’s Very Large Telescope (VLT. The discovered emission covers nearly the entire field of view — leading the team to extrapolate that almost all of the sky is invisibly glowing with Lyman-alpha emission from the early Universe [1].

Astronomers have long been accustomed to the sky looking wildly different at different wavelengths, but the extent of the observed Lyman-alpha emission was still surprising. “Realising that the whole sky glows in optical when observing the Lyman-alpha emission from distant clouds of hydrogen was a literally eye-opening surprise,” explained Kasper Borello Schmidt, a member of the team of astronomers behind this result.

“This is a great discovery!” added team member Themiya Nanayakkara. “Next time you look at the moonless night sky and see the stars, imagine the unseen glow of hydrogen: the first building block of the universe, illuminating the whole night sky.”

The HUDF region the team observed is an otherwise unremarkable area in the constellation of Fornax (the Furnace), which was famously mapped by the NASA/ESA Hubble Space Telescope in 2004, when Hubble spent more than 270 hours of precious observing time looking deeper than ever before into this region of space.

The HUDF observations revealed thousands of galaxies scattered across what appeared to be a dark patch of sky, giving us a humbling view of the scale of the Universe. Now, the outstanding capabilities of MUSE have allowed us to peer even deeper. The detection of Lyman-alpha emission in the HUDF is the first time astronomers have been able to see this faint emission from the gaseous envelopes of the earliest galaxies. This composite image shows the Lyman-alpha radiation in blue superimposed on the iconic HUDF image.

MUSE, the instrument behind these latest observations, is a state-of-the-art integral field spectrograph installed on Unit Telescope 4 of the VLT at ESO’s Paranal Observatory [2]. When MUSE observes the sky, it sees the distribution of wavelengths in the light striking every pixel in its detector. Looking at the full spectrum of light from astronomical objects provides us with deep insights into the astrophysical processes occurring in the Universe [3].

“With these MUSE observations, we get a completely new view on the diffuse gas ‘cocoons’ that surround galaxies in the early Universe,” commented Philipp Richter, another member of the team.

The international team of astronomers who made these observations have tentatively identified what is causing these distant clouds of hydrogen to emit Lyman-alpha, but the precise cause remains a mystery. However, as this faint omnipresent glow is thought to be ubiquitous in the night sky, future research is expected to shed light on its origin.

“In the future, we plan to make even more sensitive measurements,” concluded Lutz Wisotzki, leader of the team. “We want to find out the details of how these vast cosmic reservoirs of atomic hydrogen are distributed in space.”

[1] Light travels astonishingly quickly, but at a finite speed, meaning that the light reaching Earth from extremely distant galaxies took a long time to travel, giving us a window to the past, when the Universe was much younger.

[2] Unit Telescope 4 of the VLT, Yepun, hosts a suite of exceptional scientific instruments and technologically advanced systems, including the Adaptive Optics Facility, which was recently awarded the 2018 Paul F. Forman Team Engineering Excellence Award by the American Optical Society.

[3] The Lyman-alpha radiation that MUSE observed originates from atomic electron transitions in hydrogen atoms which radiate light with a wavelength of around 122 nanometres. As such, this radiation is fully absorbed by the Earth’s atmosphere. Only red-shifted Lyman-alpha emission from extremely distant galaxies has a long enough wavelength to pass through Earth’s atmosphere unimpeded and be detected using ESO’s ground-based telescopes.