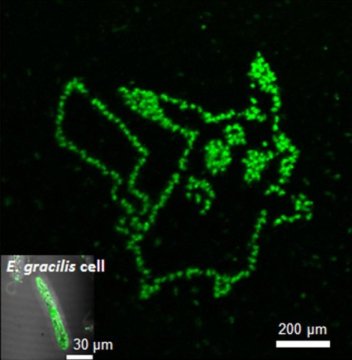 In partnership with several institutes across Japan, scientists at Nara Institute of Science and Technology, Nara, Japan, report a new microscopy system that visualizes the production of metabolites in living cells. Fluorogenic aptamers that fluoresce when bound to metabolites were inserted into algae cells by femtosecond laser photoporation and observed by fluorescence microscopy. The new system is expected to contribute to the metabolic engineering of environmentally friendly biofuels, pharmaceutical and other products

In the search for new sources of consumables, scientists have come to realize that life itself could be the solution. Metabolic engineers have altered the metabolism of living organisms to make new drugs, biodegradables and biofuels. One of the best examples in modern times is penicillin. Metabolic engineering bacteria has improved the production rate of this drug more than 100 times.

A major challenge in this field is identifying which cells are the most productive. It is relatively easy to study bulk populations, which results in information about the metabolism of the overall cell population. However, it remains extremely difficult to identify which cells in the bulk population stand above the rest in terms of metabolite production and are therefore the best to copy and imitate. This identification requires observing inside individual cells in real time while the metabolite is made. Scientists at Nara Institute of Science and Technology (NAIST) report a new system that achieves this goal in microalgae cells. The system, which can be read about in Scientific Reports, combines fluorogenic aptamers with femtosecond laser photoporation.

“Algae have a number of attractive qualities for metabolic engineering. First, they are extremely adaptive, as they have the ability to live in a broad range of environments, from the equator to the poles and even in heavily saline or polluted waters,” says Professor Yoichiroh Hosokawa, who led the study.

Normally, scientists use fluorescence microscopy to look inside a cell. This strategy involves attaching a molecule that fluoresces to the metabolite of interest. However, because of cell wall protection, it has been difficult to introduce fluorescent molecules that detect specific metabolites in microalgae cells from outside.

Hosokawa’s team has therefore been developing fluorescent aptamers that emit fluorescence upon binding to the metabolite paramylon and manufacturing methods that can introduce them into the cell by laser pulses.

“We synthesized a peptide aptamer binding to paramylon, and introduced it into Euglena gracilis cells by single cell laser processing,” said Dr. Takanori Maeno, who first-authored the study. “Paramylon is produced only by Euglena and functions like fiber. It can be refined into biofuels,” he added.

To get the aptamer inside the cell, the scientists shot the cells with laser pulses only femtoseconds long. These pulses created temporary pores big enough for the aptamers to enter. Once inside, the cells turned green only in places where the aptamers bound to paramylon. Using this technique, Hosokawa’s group could measure the accumulation of paramylon with time, thus discriminating efficient cells from their unproductive neighbors.

While the system was only tested on paramylon, Hosokawa states that other metabolites will be detectable with appropriate aptamers.

“Our method gives spatial and temporal information about target intracellular paramylon, but should work for any kinds of metabolites in future. It will be useful for selecting high-performance cells,” he said.