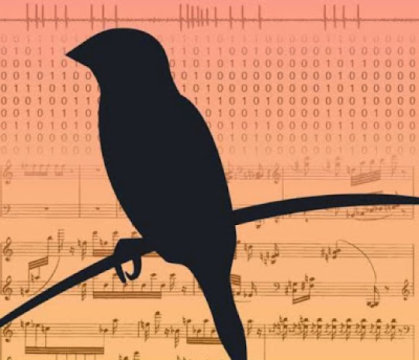 Songbirds learn to sing in a way similar to how humans learn to speak — by listening to their fathers and trying to duplicate the sounds. The bird’s brain sends commands to the vocal muscles to sing what it hears, and then the brain keeps trying to adjust the command until the sound echoes the one made by the parent.

During such trial-and-error processes of sensorimotor learning, a bird remembers not just the best possible command, but a whole suite of possibilities, suggests a study by scientists at Emory University. The Proceedings of the National Academy of the Sciences (PNAS) published the study results, which include a new mathematical model for the distribution of sensory errors in learning.

“Our findings suggest that an animal knows that even the perfect neural command is not going to result in the right outcome every time,” says Ilya Nemenman, an Emory professor of biophysics and senior author of the paper. “Animals, including humans, want to explore and keep track of a range of possibilities when learning something in order to compensate for variabilities.”

Nemenman uses the example of learning to swing a tennis racket. “You’re only rarely going to hit the ball in the racket’s exact sweet spot,” he says. “And every day when you pick up the racket to play your swing is going to be a little bit different, because your body is different, the racket and the ball are different, and the environmental conditions are different. So your body needs to remember a whole range of commands, in order to adapt to these different situations and get the ball to go where you want.”

First author of the study is Baohua Zhou, a graduate student of physics. Co-authors include David Hofmann and Itai Pinkoviezky (post-doctoral fellows in physics) and Samuel Sober, an associate professor of biology.

Traditional theories of learning propose that animals use sensory error signals to zero in on the optimal motor command, based on a normal distribution of possible errors around it — what is known as a bell curve. Those theories, however, cannot explain the behavioral observations that small sensory errors are more readily corrected, while the larger ones may be ignored by the animal altogether.

For the PNAS paper, the researchers analyzed experimental data on Bengalese finches collected in previous work with the Sober lab. The lab uses finches as a model system for understanding how the brain controls complex vocal behavior and motor behavior in general.

Miniature headphones were custom-fitted to adult birds and used to provide auditory feedback in which the pitch that the bird perceives it vocalizes at could be manipulated, replacing what the bird hears — its natural auditory feedback — with the manipulated version. The birds would try to correct the pitch they were hearing to match the sound they were trying to make. Experiments allowed the researchers to record and measure the relationship between the size of a vocal error the bird perceives, and the probability of the brain making a correction of a specific size.

The researchers analyzed the data and found that the variability of errors in correction did not have the normal distribution of a bell curve, as previously proposed. Instead, the distribution had long tails of variability, indicating that the animal believed that even large fluctuations in the motor commands could sometimes produce a correct pitch. The researchers also found that the birds combined their hypotheses about the relationship between the motor command and the pitch with the new information that their brains received from their ears while singing. In fact, they did this surprisingly accurately.

“The birds are not just trying to sing in the best possible way, but appear to be exploring and trying wide variations,” Nemenman says. “In this way, they learn to correct small errors, but they don’t even try to correct large errors, unless the large error is broken down and built up gradually.”

The researchers created a mathematical model for this process, revealing the pattern of how small errors are corrected quickly and large errors take much longer to correct, and might be neglected altogether, when they contradict the animal’s “beliefs” about the errors that its sensorimotor system can produce.

“Our model provides a new theory for how an animal learns, one that allows us to make predictions for learning that we have tested experimentally,” Nemenman says.

The researchers are now exploring if this model can be used to predict learning in other animals, as well as predicting better rehabilitative protocols for people dealing with major disruptions to their learned behaviors, such as when recovering from a stroke.

The work was funded by the National Institutes of Health BRAIN Initiative, the James S. McDonnell Foundation, and the National Science Foundation. The NVIDIA corporation donated high-performance computing hardware that supported the work.