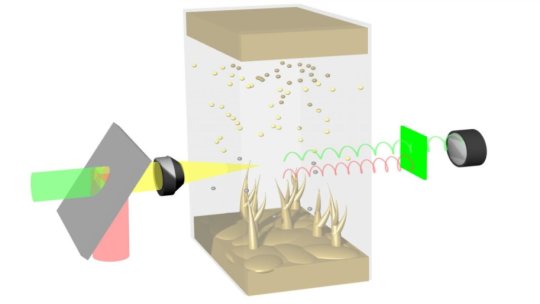 While researchers know that the growth of dendrites, which are needle-like lithium whiskers that form internally in battery electrodes, is affected by how ions move in the electrolyte, they do not understand how ion transport and inhomogeneous ionic concentration affect the morphology of lithium deposition. Imaging ion transport in a transparent electrolyte has proved to be highly challenging, and current techniques have been unable to capture low ionic concentrations and ultrafast electrolyte dynamics.

Columbia University researchers announced today that they have used Stimulated Raman Scattering (SRS) microscopy, a technique widely used in biomedical studies, to explore the mechanism behind dendrite growth in lithium batteries and, in so doing, have become the first team of material scientists to directly observe ion transport in electrolytes. They discovered a lithium deposition process that corresponds to three stages: no depletion, a partial depletion (a previously unknown stage), and full depletion of lithium ions. They also found a feedback mechanism between lithium dendrite growth and heterogeneity of local ionic concentration that can be suppressed by artificial solid electrolyte interphase in the second and third stages. The paper is published online in Nature Communications.

“Using Stimulated Raman Scattering microscopy, which is fast enough to catch the quickly changing environment inside the electrolyte, we’ve been able to figure out not only why lithium dendrites form but also how to inhibit their growth,” says Yuan Yang, co- author of the study and assistant professor of materials science and engineering, department of applied physics and applied mathematics at Columbia Engineering. “Our results show that ion transport and inhomogeneous ionic concentration is critical to the formation of lithium dendrites on the lithium surface. The capability to visualize ion movement will help us improve the performance of all kinds of electrochemical devices — not just batteries, but also fuel cells and sensors.”

For this study, Yang collaborated with Wei Min, professor of chemistry at Columbia University and the study’s co-author. Ten years ago, Min developed SRS with colleagues as a tool to map chemical bonds in biological samples. Yang learned about the technique from Min’s website , and realized that SRS might be a valuable tool in his battery research.

“SRS is three to six orders of magnitude faster than conventional spontaneous Raman microscopy,” Yang noted. “With SRS, we can acquire a 3D image of resolution of 300 nm ((1/300 of the diameter of human hair) in 10 seconds with a chemical resolution ~ 10 mM, thus making it possible to image ion transport and distribution.”

The study revealed that there are three dynamic stages in the Li deposition process:

Stage 2 is a critical transitional point at which the heterogeneous Li+ depletion on the Li surface induces the lithium deposition to grow from “mossy lithium mode” to “dendrite lithium mode.” At this stage, two regions begin to appear: a dendrite region where lithium starts to deposit dendrites at a faster and faster rate, and a non-dendrite region where the lithium deposition slows down and even stops. These results are also consistent with predictions made from simulations carried out by Pennsylvania State University collaborators, Long-Qing Chen, professor of materials science and engineering, and his PhD student Zhe Liu.

“The clever use of Stimulated Raman Scattering microscopy to visualize the electrolyte concentration within an operating electrode is a real breakthrough in the imaging of electrochemical systems,” says Martin Bazant, professor of chemical engineering and mathematics at the Massachusetts Institute of Technology. “In the case of lithium electrodeposition, the link between local salt depletion and dendritic growth was directly observed for the first time, with important implications for the design of safe rechargeable metal batteries.”

Following up on their observations, the Columbia team then developed a method to inhibit dendrite growth by homogenizing the ionic concentration on the lithium surface at both stages 2 and 3.

“When we made the surface ion distribution uniform and mitigated the ionic heterogeneity by depositing an artificial solid electrolyte interface, we were able to suppress the dendrite formation,” says the study’s lead author Qian Cheng, a postdoctoral researcher in Yang’s lab. “This gives us a strategy to suppress dendrite growth and move on to improving the energy density of current batteries while developing next-generation energy storage.”

Min is very pleased that his SRS technique has become such a powerful tool for the materials and energy fields. “Without SRS microscopy, we would not have been able to see and validate such a clear correlation between the Li+ concentration and dendrite growth,” he says. “We are excited that more people in materials science will learn about this tool. Who knows what we will see next?”