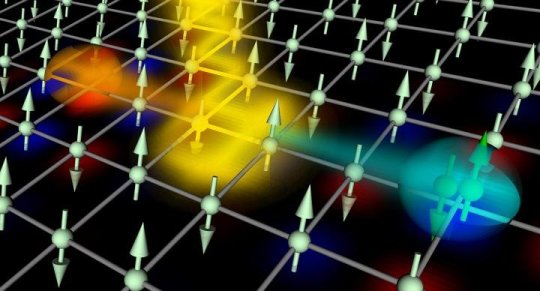 Materials known as Mott insulators are odd things. Under normal electron band theory they ought to conduct electricity, but they do not, due to interactions among their electrons. But now, scientists from the RIKEN Cluster for Pioneering Research have shown that pulses of light could be used to turn these materials beyond simple conductors to superconductors — materials that conduct electricity without energy loss. This process would happen through an unconventional type of superconductivity known as “eta pairing.”

Using numerical simulations, the researchers found that this unconventional type of conductivity, which is believed to take place under non-equilibrium conditions in strongly correlated materials such as high-Tc cuprates and iron-pnictides, arises due to a phenomenon known as eta pairing. This is different form the superconductivity observed in the same strongly correlated materials under equilibrium conditions, and is thought to involve repulsive interactions between certain electrons within the structure. It is also different from traditional superconductivity, where the phenomenon arises due to interactions between electrons and vibrations of the crystal structure, inducing mutual interactions between electrons through vibrations and thus overcoming the repulsion between the electrons.

Thirty years ago, the mathematical physicist Chen-Ning Yang originally proposed the idea of eta-pairing, but because it was a purely mathematical concept, it was understood as a virtual phenomenon that would not take place in the real world. But for the present study, the researchers used non-equilibrium dynamics to analyze the effect of pulses of light on a Mott insulator, and found that the effect would in fact happen in the real world. “What is interesting,” says first author Tatsuya Kaneko, a postdoctoral researcher at the RIKEN Cluster for Pioneering Research, “is that our calculations showed that this takes place based on the beautiful mathematical structure that Yang and his followers formulated so many years ago.”

According to Seiji Yunoki, who led the research team, “This work provides new insights not only into the phenomenon of non-equilibrium dynamics, but also could lead to the development of new high-temperature superconductors, which could be useful in applications. What remains is to perform actual experiments with Mott insulators to verify that this process actually takes place.”

The research was published in Physical Review Letters.