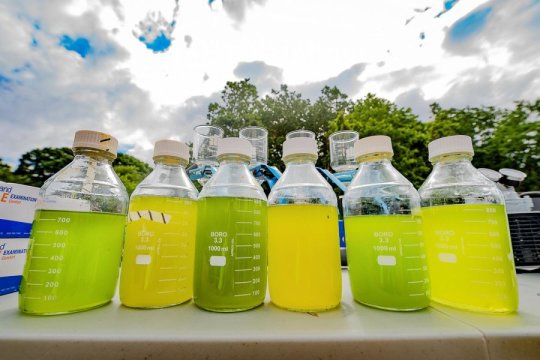 A diverse mix of species improves the stability and fuel-oil yield of algal biofuel systems, as well as their resistance to invasion by outsiders, according to the findings of a federally funded outdoor study by University of Michigan researchers.

U-M scientists grew various combinations of freshwater algal species in 80 artificial ponds at U-M’s E.S. George Reserve near Pinckney in the first large-scale, controlled experiment to test the widely held idea that biodiversity can improve the performance of algal biofuel systems in the field.

“The results are key for the design of sustainable biofuel systems because they show that while a monoculture may be the optimal choice for maximizing short-term algae production, polycultures offer a more stable crop over longer periods of time,” said study lead author Casey Godwin, a postdoctoral research fellow at U-M’s School for Environment and Sustainability.

The team’s findings are scheduled for publication June 18 in the journal Global Change Biology-Bioenergy.

Algae-derived biocrude oil is being studied as a potential renewable-energy alternative to fossil fuels. Because they grow quickly and can be converted to bio-oil, algae have the potential to generate more fuel from less surface area than crops like corn. But the technical challenges involved in growing vast amounts of these microscopic aquatic plants in large outdoor culture ponds have slowed progress toward commercial-scale cultivation.

Outside — far from the controlled conditions of the laboratory — an algal biofuel cultivation system must maintain steady, stable growth of fuel-ready algae in the face of fluctuating weather conditions, the threat of population crashes caused by diseases and pests, and invasion by nuisance species of algae.

Decades of ecological research have demonstrated that plant and animal communities containing a rich mix of species are, on average, more productive than less-diverse communities, more stable in the face of environmental fluctuations, and more resistant to pests and diseases.

But the idea that algal polycultures can outperform monocultures had never been rigorously tested under large-scale field conditions. With funding from the National Science Foundation and the U-M Energy Institute, U-M ecologist Bradley Cardinale and his colleagues set out to test this hypothesis, using a two-part study.

The second phase involved field-testing the four most promising algal species and species mixtures by growing them outdoors inside 290-gallon cattle tanks at the 1,300-acre U-M reserve. That work was done in summer 2016 and led to the upcoming Global Change Biology-Bioenergy paper.

In both phases of the study, colleagues at the U-M College of Engineering used a technique called hydrothermal liquefaction to convert the algae into combustible oils, or biocrude, which can be refined to make transportation fuels like biodiesel.

“First we evaluated different combinations of algae in the lab, and then we brought the best ones out to nature, where they were exposed to fluctuating weather conditions, pests, disease and all the other factors that have plagued algae-based fuel research efforts for 40 years,” Godwin said.

In their analysis of the algal samples collected during the 10-week E.S. George Reserve study, researchers compared the ability of monocultures and polycultures to do several jobs at once: to grow lots of algal biomass, to yield high-quality biocrude, to remain stable through time, to resist population crashes and to repel invasions by unwanted algal species.

Their analysis showed that the use of polycultures significantly delayed invasion by unwanted species of algae; that biocrude yields were significantly higher in the two- and four-species polycultures than in the monocultures; and that diverse crops of algae were more stable over time.

And while monocultures tended to be good at one or two jobs at a time, polycultures performed more of the jobs at higher levels than any of the monocultures, a trait called multifunctionality.

But at the same time, polycultures produced less biomass than the best-performing monoculture. And the use of polycultures had no significant effect on the magnitude and timing of sudden, sharp declines in algal production known as population crashes.

“Our findings suggest there is a fundamental tradeoff when growing algal biofuel,” said Cardinale, a professor at the U-M School for Environment and Sustainability.

“You can grow single-species crops that produce large amounts of biomass but are unstable and produce less biocrude. Or, if you are willing to give up some yield, you can use mixtures of species to produce a biofuel system that is more stable through time, more resistant to pest species, and which yields more biocrude oil.”

Authors of the Global Change Biology paper, in addition to Godwin and Cardinale, are U-M’s Aubrey Lashaway and David Hietala, and Phillip Savage of Pennsylvania State University.

Members of the same research team have published other recent papers that examine the benefits of diversity in algal biofuels systems for minimizing fertilizer use, recycling wastes, and improving the chemical properties of biocrude.

“Collectively, these results show how applying principles from ecology could help in the design of next-generation renewable fuel systems,” Godwin said.